The PokerNews $10,000 PokerStars League is Underway 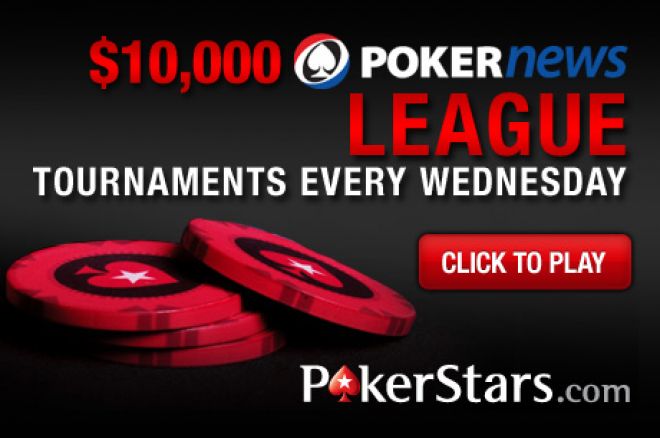 The first event of the $10,000 PokerStars PokerNews League has entered the history books and it was "RogerdelPK" who won the first event and put themselves in the early lead on the league leaderboard.

Not only did "RogerdelPK" win cash for their first place finish, but also received 20 league points (plus 1 participation point) for their big effort and now has a good chance of finishing in the top 27 players who will qualify to participate in the $10,000 PokerNews League Final taking place on Dec. 21 at 2100 EST (0200 GMT).

Remember that the $10,000 PokerNews League is open to players from all regions and with only one event being played, now is the time to start playing in the weekly league events which are played every Wednesday at 2100 EDT (0200 BST).

If the added cash prize pools aren't enticing enough to load up PokerStars, remember that it is the all-important league points that each and every player will be gunning for. Even if you don't manage to finish in the top 10 each week, players still receive 1 bonus point just for participating in a league event and with nine events remaining, players are still able to accumulate 9 points just for playing each week.

The events in the $10,000 PokerNews League are open to everyone, but are password protected, with the password released on PokerNews 48 hours before each event begins.

To further add to the action of the exciting format, players have the ability to choose one event as a wild card tournament, where double the amount of points will be earned. That means regardless of the outcome of the wild card event, players will receive at least 2 league points. Players must announce their wild card tournament on the dedicated forum thread prior to the start of the chosen event. Choose carefully as only one wild card means only once chance at double points!

When the weekly league events are all over it will be the top 27 players on the league leaderboad who will advance to the PokerStars PokerNews League Final on Dec. 21 at 2100 EST (0200 GMT). The final will see a hefty $10,000 up for grabs and the top 18 places on will go home with a share of the prizepool for their gallant effort in the league.

In addition to the $10,000 PokerNews League which is open to everyone, there will be seven additional region-specific leagues. The Australasian League is also open to all players, while each of the other leagues will be locked to specific countries and will feature the same payout structure as above, but with varying prize pools depending on the region.

Click on your country below to view all the details of your league and become the champion of your region!

Iberian League: The league features a $4,000 prize pool and is locked to players with accounts based in Portugal and Spain.

Western European League: The league features a $9,000 prize pool and is locked to players with accounts based in the United Kingdom, Ireland, Germany, Switzerland, Luxemburg, Liechtenstein, Austria and the Netherlands.

Central European League: The league features a $9,000 prize pool and is locked to players with accounts based in Solvenia, Balkans, Czech Republic and Hungary.

Eastern European League: The league features a $9,000 prize pool and is locked to players with accounts based in Romania, Bulgaria, the Russian Federation, Poland and Ukraine.

Nordic League: The league features a $4,000 prize pool and is locked to players with accounts based in Denmark, Finland, Norway and Sweden.

Baltic League: The league features a $9,000 prize pool and is locked to players based in Estonia, Israel, Turkey, Lithuania and Latvia.

Australasian League: The league features a $5,000 prize pool and is targeted at players with accounts based in Japan, Korea, China, India and Australia. (This league is also open to everyone.)

If you don’t already have an account but would like to play in one of our fantastic leagues, be sure to sign-up to PokerStars through PokerNews and use our 100% up to $600 first-deposit bonus when using the marketing code "POKERNEWS.COM" and the bonus code "STARS600".