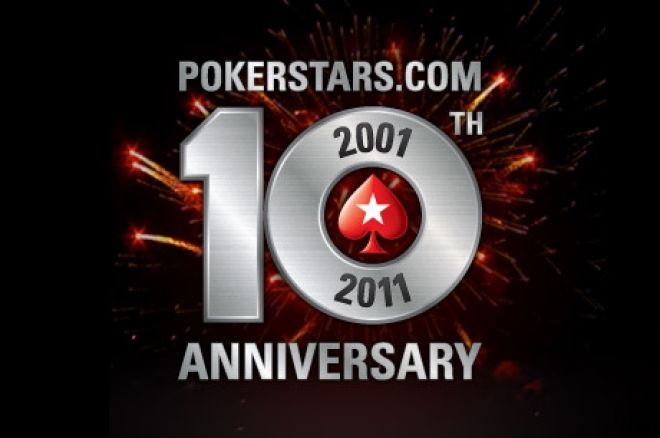 Download PokerStars for a once in a lifetime chance at sharing in a gigantic $10 Million prize pool!

It’s coming up on 10 years since PokerStars opened its doors to poker enthusiasts all around the world and they are planning on celebrating in styles as millions of dollars in cash and added value is on offer over the coming weeks.

To celebrate their 10th anniversary, PokerStars are offering a huge range of different promotions, more of which will be added over the next couple of weeks.

So far a gargantuan $10 Million Guarantee has been put in place for the Sunday Million, while a big PokerStars Caribbean Adventure giveaway is also in the books.

It’s the biggest Sunday Million to ever be offered and the huge $10 Million Guarantee is sure to draw a huge field of players with one goal in mind.

Some players might assume that PokerStars would have to increase the buy-in if they are offering such a massive guarantee, but that’s not the case. The buy-in will still be the trademark $215 that players are accustomed to.

The first Sunday Million was played on Mar. 5, 2006 and ever since then it has become the premier weekly tournament in the world and is considered one of the most prestigious tournaments for a player to have on their resumes.

Be sure to put Dec. 18 in your diary as the 10th Anniversary $10 Million Sunday Million is not to be missed as a life changing $2 Million is guaranteed for the eventual winner.

There will be hundreds of satellites running in the days leading up to the $10 Million Sunday Million, so be sure to check in the PokerStars client and you could win yourself millions of dollars by satelliting from as little as $1.

Over the years, PokerStars has established itself as not only the biggest and most popular online poker site but have also continued to offer some of the best live tournaments in the world.

One of the most popular live events on the yearly tournament calendar is the PokerStars Caribbean Adventure and in celebration of their 10th year, PokerStars will be giving away 100 PCA prize packages.

The best part of the PCA giveaway is the fact that players can win themselves a package for absolutely no outlay.

PokerStars is running free-to-play qualifiers every ten minutes and the top 10 players in each of these qualifiers will win a seat in the PCA Weekly Finals. Players are only eligible to play one of these freerolls each day but there are also FPP buy-in satellites and cheap-rolls on offer as alternatives to win PCA Weekly Finals seats.

The weekly finals run every Sunday from Nov. 13 through to Dec. 11 and along with offering the PCA packages also offer cash prizes to the top 1,000 finishers.

If you don’t have an account, make sure you sign-up to PokerStars through PokerNews and don’t miss out on helping celebrate the 10th anniversary of PokerStars! Don't forget to utilize our 100% up to $600 first-deposit bonus by using the marketing code "POKERNEWS.COM" and the bonus code "STARS600.".