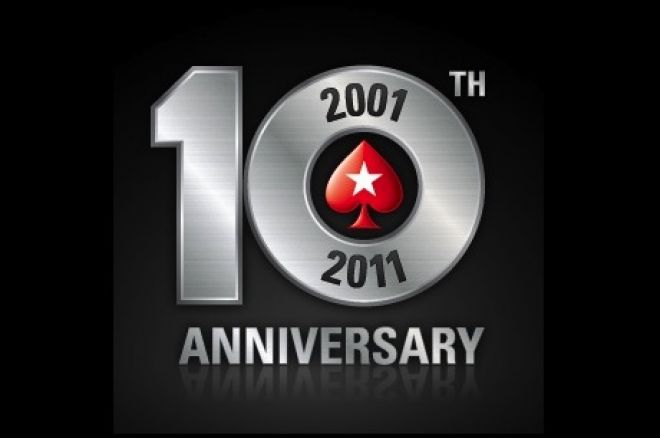 PokerStars is celebrating its 10th Anniversary next month and will mark the milestone by giving players a chance at countless promotions and giveaways, including the biggest Sunday Million ever.

On Dec. 18, 2011, the site's weekly flagship event will offer a guaranteed prize pool of $10 million — the largest ever for a Sunday Million — and still with a buy-in of just $215. The winner will collect a colossal top prize of at least $2 million. The last player to win $2 million in a single tournament on PokerStars wasTyson "POTTERPOKER" Marks when he won the 2010 World Championship of Online Poker $5,200 buy-in Main Event in for $2,278,097.

PokerStars will also be giving away 100 packages (each worth more than $15,000) to the PokerStars Caribbean Adventure, which takes place from Jan. 5 through Jan. 14, 2012, in Paradise Island, Bahamas. Beginning Nov. 13 and running through Dec. 11, PokerStars will host two weekly qualifiers, each of which will award 10 PCA prize packages and $10,000 in cash to the winner.

"Amazing that it’s been 10 years! I'm very proud of my association with PokerStars, and this December's 10th Anniversary Celebration is going to be a doozy!” said Team PokerStars Pro Daniel Negreanu. “There will be tons of cash prizes for bankrolls of all sizes, plus giveaways and a $10 million Sunday Million event.”

PokerStars launched its real-money poker site on Dec. 12, 2001, and has since become the largest online card room in the world. The site ran its first Sunday Million on March 5, 2006, when American poker pro Daryl "aaaaaa" Jace bested a field of nearly 6,000 players to collect the top prize of $173,844. Since that day, the Sunday Million has been regarded as the biggest and most anticipated weekly online poker tournament on the Internet.

Get more details on the 10th Anniversary celebration at PokerStars.com.