PartyPoker Weekly: Race Against Time and Win Huge in the VIP Countdown! 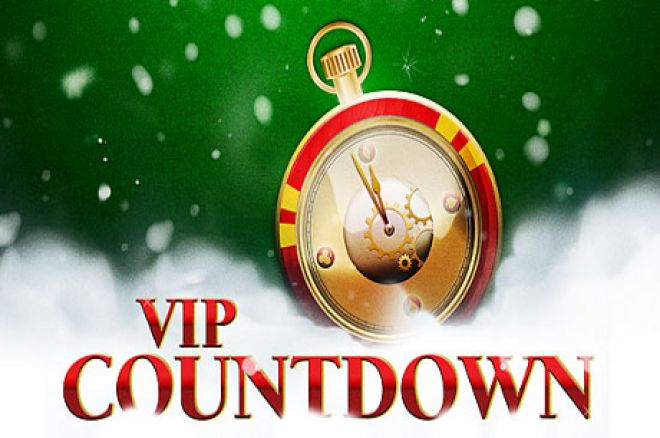 Opt-in on the VIP Countdown page and be prepared to race towards some free cash. The dates of the promotion period are shown below:

As you can see, the promotion will run for four weeks and during each of those weeks PartyPoker have set points targets for you to hit. Earn 100 points on five separate days of a qualifying period and you will receive $25. Increase your volume and earn 100 points every day during a qualifying week and PartyPoker will give you $45!

Earn enough points (1,000 per day) and you could be walking away with $750 in cash! Check out the table below for information on prize distribution.

As an added incentive, PartyPoker will give an extra $1,000 to any player who generates 1,000 points every day of the promotion! This takes to total potential winnings to a staggering $4,000!

Please note, this promotion is only open to players who have Palladium or Palladium Elite status on PartyPoker.

Poker legend Mike Sexton recently updated his blog on PartyPoker, where he listed his Top 10 poker moments of 2012. Opening his list his the opening televised event from Season XI of the World Poker Tour; the PARX Poker Open Poker Classic in Philadelphia. Sexton said of the tournament, "This was the WPT’s first visit to Philly and to PARX and the casino was quite impressive. What really impressed me, however, were the six finalists – all from the East Coast and all in their 20′s!"

Other highlights from Sexton's 2012 include PokerStars buying Full Tilt; Women at the WSOP; Marvin Rettenmaier's back-to-bac WPT titles and The ONE DROP tournament. To share Sexton's thoughts, head over to his PartyPoker blog.

The Contenders promotion will see someone walk away with the lion's share of $12,000 and bragging rights over their peers.

The promotion revolves around six freerolls, which have prize pools ranging from $2,000 to an eye-watering $12,000. Gaining access to the freerolls is a simple task, earn the required number of points (as shown in the table below) and a seat to the following month's freeroll tournament will be awarded.

As you can see, by earning just a single PartyPoint during the month, you will gain access to a $2,000 freeroll! Get your grind on and generate 1,000 PartyPoints at the poker tables, and you will be able to step into the ring of a $12,000 freeroll!

PartyPoints are awarded at a rate of two per $1 paid in rake or tournament fees.

The freerolls will take place on the second Saturday of the month, with the first set of freerolls running in February. Keep your guard up, roll with the punches, and good luck!

PartyPoker is literally bigger and better than ever after the migration of bwin customers was completed during late December. With the bwin players now competing on the PartyPoker network, traffic figures have been given a significant boost, and as a result, guaranteed prize pools of tournaments have soared.

PartyPoker now boasts of $15 million in guaranteed prize pools every month and we believe that figure will only go up during 2013. Along with the aforementioned $10,000 Daily Giveaway, PartyPoker has upped its guarantees on a plethora of tournaments, including increasing the prize pool of their flagship tournament from $200,000 to $300,000!

Check out this article for more information on the new PartyPoker.

Running throughout January, the $10,000 Daily Giveaway will do exactly as you would expect from a promotion bearing that name: it will give away $10,000 every day!

Every day during January there will be no fewer than five $1,000 freerolls taking place and a huge $5,000 freeroll, too. All PartyPoker players who have made at least one real-money deposit into their accounts are eligible to participate, so make yours today!

Get involved in this fabulous promotion and help yourself to your share of the $310,000 in freerolls taking place in January!

Grab A Free $50 From PartyPoker

Start building yourself a substantial bankroll during 2013 with a free $50 from PartyPoker. Everyone loves free money, so all you have to do to get your hands on some free cash is follow the simple steps below, and $50 is yours to keep.

Once you have received the confirmation email, $20 will be placed in your PartyPoker account. You must earn at least 40 PartyPoints before you will be able to withdraw the free $20. If you do not earn 40 PartyPoints within 60 days, the initial $20, or whatever remains of it, will be forfeited. PartyPoints are earned at a rate of two PartyPoints per $1 in rake or tournament fees, so earning 40 within 60 days is easy.

Once you have earned 40 PartyPoints, a further $30 will be deposited into your account bringing the total free cash to $50. You must then generate 160 points before you can cash out any of the $30 and must do so within 120 days otherwise the $30, or the remainder of it will be forfeited.

What will you spend your free $50 on?