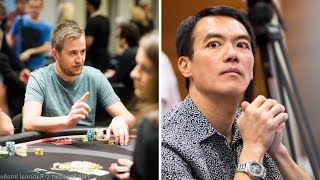 "I Folded Because I Wanted To Tell Him That"

John Juanda on his Hall of Fame Induction

Oftentimes when big names in the poker world are tossed around amongst fans of the game, John Juanda’s name is left out. It’s not that he hasn’t had a deserving career, but rather his quiet nature that sometimes leaves people to forget about how great a player he really is.

John Juanda is a professional poker player of Chinese-Indonesian origin currently residing in Marina del Rey, California. He is known for winning five World Series of Poker bracelets first of which he collected in 2002 by winning the $1,500 Limit Ace to Five Triple Draw event for almost $50,000. He was also one of the founders of the infamous online poker site Full Tilt Poker.

Born in Indonesia, Juanda came to the United States in 1990 when he enrolled at Oklahoma State Univeristy. After graduating from OSU, John went on to receive an MBA from Seattle University. In order to help with the cost of school, Juanda worked various jobs on the side. One of his jobs had the high school track star selling Bibles from door to door.

When not working or attending class, Juanda spent time in local casinos where he began honing his skills in poker. It didn’t take long for Juanda to realize that poker was his calling. In 1996, John completed his MBA program and took to the West Coast felt. In order to seek out larger stakes, Juanda relocated to California.

After sticking it out in cash games and smaller buy-in tournaments, Juanda set out for the WSOP in 1999 where he cashed in two events. The following year, he cashed again at the WSOP and also earned a second place finish at the United States Poker Championships.

Just a couple of years later in 2002, Juanda was able to put together a nice string of five cashes at the WSOP, one of which earned him his first bracelet. The next year, Juanda returned to the WSOP and landed himself two more bracelets. In 2008 Juanda won his first WSOP Europe bracelet by taking down the WSOPE London Main Event good for over $1.5 million.

Aside from his five WSOP bracelets Juanda also has a record of making six WPT final tables and nineteen money finishes, however, his WPT title collection is still empty. Juanda came close to winning a WPT event in 2002 when he finished in second place at the Five Diamond World Poker Classic $10,000 No-Limit Hold'em Final event. He lost that heads-up match to Gus Hansen and took home almost $280,000 for the runner-up finish.

Juanda has a total of three European Poker Tour money finishes on his record. He made his first EPT cash in 2009 when he finished in 40th place at the EPT London Main Event. His biggest achievement on the European circuit came a year later when Juanda came back to London to fall just short of the title loosing the final play to the young Scottish prodigy David Vamplew and finishing the Main Event in second place for £545,000.

If it’s consistency you want, John Juanda will deliver. Each and every year, Juanda has put up numerous cashes and deep runs along the tournament circuit. He’s even proven that he is a force in tournaments outside the U.S. His three most significant finishes outside of the States come with a first place at the 2006 Crown Australian Poker Championship for over $700,000, a second place finish at the 2012 WSOPE Cannes €50,000 Majestic Roller event for €600,000 and a fifth place at the 2012 Macau High Stakes Challenge $258,000 Super High Roller good for $1,645,753.

John Juanda was one of the nine poker player who founded the Full Tilt Poker online poker site and represented Team Full Tilt colors in live tournaments until the site seized its operations in 2011.