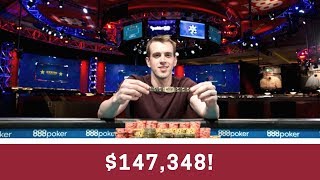 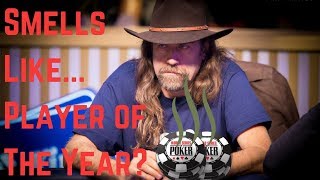 John Racener is a professional poker player from Tampa, Florida. He is best known for finishing runner-up in the 2010 World Series of Poker Main Event when he lost heads-up to the eventual champion Jonathan Duhamel. However, despite losing the battle for the trophy, Racener still took home a whopping $5.5 million in cash.

Racener was born in 1985 in Dunedin, Florida. His poker career began at the age of 18 when his mother loaned John $50 which he used to start playing poker online. After six weeks Racener already had $30,000 in his online account. When he turned 21, Racener immediately hit the live tournament circuit. His first event was a huge success as Racener final tabled the World Series of Poker Circuit $4,900 Championship event in Atlantic City. He ended up finishing the tournament in third place and taking home just over $100,000 in cash.

Racener grew up in in Port Richey, Florida where he graduated from Ridgewood High School. He did a number of sports while in school including tennis, basketball, soccer, and baseball. Racener learned poker at home playing with his family. He enjoyed the game from the very beginning and later on was introduced to online poker by a friend. His success at the online tables encouraged Racener to pursue a career as a professional poker player and by the age of 21, he was already off playing some of the major poker tournaments.

Racener first entered the World Series in 2007 and scored two minor money finishes. However, his next summer turned out to be much better as Racener reached his first WSOP final table and took home $37,000 for the sixth place finish at the $2,500 Omaha/Seven Card Stud Hi-Lo event. Four more cashes came in 2009, but it was in 2010 when Racener really hit the spotlight. He scored two final tables that year, one in Vegas and one in London at the WSOPE. It was that summer that Racener collected the biggest cash prize of his career, the $5.5 million for the runner-up finish in the 2010 WSOP Main Event.

Then in 2011 Racener collected another four WSOP money finishes reaching two more final tables, while the 2012 World Series saw him cashing in six events including one final table finish.

Racener scored his best WPT result in 2010 when he made a deep run in the Doyle Brunson Five Diamond World Poker Classic $10,000 Championship event. He eventually finished the tournament in fourth place cashing for more than $230,000.

In December, 2010 Racener scored his first live tournament money finish when he final tabled the WSOP-Circuit Championship event in Atlantic City. He finished in third place for a $103,527 cash prize. Just one week later Racener won his first live tournament when he took down the $1,000 No-Limit Hold'em Bellagio Weekly Tournament for just over $27,000. A year later Racener won the WSOP-C Atlantic City $5,150 Main Event taking home $379,392 in cash.