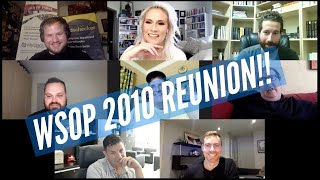 Global Poker Masters: How Did You Pick Your Heads Up Representatives?

Jonathan Duhamel is best known for winning the 2010 World Series of Poker Main Event for almost $9 million. On his way to the WSOP title Duhamel outplayed the field of 7318 players including the talent-packed final table featuring such big names as Matthew Jarvis, John Dolan, Michael "The Grinder" Mizrachi, Filippo Candio, Joseph Cheong, and John Racener who Duhamel played heads-up against for the title.

Jonathan Duhamel, born in 1987 is a professional poker player from Boucherville, Quebec, Canada. In 2010 he scored the biggest win of his career by taking down the WSOP Main Event and collecting $8,944,310 in cash. He is also known for the incredible run at the 2012 EPT PokerStars Caribbean Adventure where he final tabled four events in just one week. He won one event and took home a total of $1.2 million in cash prizes at the 2012 PCA.

Duhamel started playing poker at the online tables when he was just 16 years old and took it to the live felt as soon as he turned 18. He made his first live money finish at the Empire State Poker Series in Verona when he finished in 47th place at the $200 No-Limit Hold'em event for just $369. Two years later, in 2008 Duhamel made his first memorable appearance in Europe at the EPT Prague Main Event bubbling the final table and taking home €42,800. After two more years he was ready to make it big in the poker world and on November 9, 2010 he won the most prestigious poker title of them all, the WSOP Main Event bracelet.

However, Duhamel's career had its dark days as well. In December, 2011 he became a victim of a robbery when two men broke into Duhamel's house tie him up and beat him. The intruders stole his WSOP bracelet, the Rolex Submarine watch which Duhamel received from PokerStars after signing the deal with the site, and some cash. The robbers were soon caught by the police, but not everything that was stolen was retrieved. The bracelet was already sold and only two months later it was found severely damaged lying in the streets of Montreal.

The 2010 World Series marked Duhamel's big breakthrough. He started by first cashing at the $1,500 No-Limit Hold'em - Six Handed tournament where he finished in 50th place for almost $6,000. Then almost a month later Duhamel made his second money finish in the $2,500 No-Limit Hold'em event taking home almost $40,000 for the 15th place. And finally, he made it among the nine finalists of the $10,000 Main Event and then took the title and almost $9 million in cash in November, 2010,

Since his big win Duhamel made a couple more WSOP cashes, however, nothing compared to his 2010 achievement.

Duhamel has three WPT cashes on his record including two final tables. In 2011 he finished seventh at the WPT Marrakech €3,000 Main Event for $30,100 while in 2012 he finished second in the L.A. Poker Classic side event and then scored thirteenth place at the Bay 101 Shooting Stars $9,500 Championship Bounty tournament.

Then in January 2012 Jonathan Duhamel put up one of the most memorable performances in the history of the PokerStars Caribbean Adventure. He made four final tables in just one week winning the $5,000 NLHE 8 Max Event for $240,000 and finishing in the runner-up position at the $25,000 NLHE 8 Max High Roller Event for $ 635,000. He cashed a total of $1.2 million at the PCA that year.

Duhamel also has a couple of notable finishes outside the poker's Top 3 live tournament circuits. In March, 2011 he scored two big money finishes in just one week. At first he took fourth place at the NBC National Heads-Up Championship $25,000 No-Limit Hold'em event for $125,000 and then finished sixth in the The Big Event's $10,000 Bounty Shootout for $58,000.

Winning the WSOP Main Event was the big breakthrough in Duhamel's poker career. Just two months after the win he signed a sponsorship deal with PokerStars and became the member of the site's Team Pro.