John Juanda folded his button, and Richard Ashby moved all in for right around 200,000 from the small blind. In the big, Phil Hellmuth made the call, and "Chufty" was at risk, and he needed a card. Hellmuth considered his play for a long while as Juanda craned his neck to sweat the decision. Hellmuth eventually slapped one card down on the felt face-down.

With the draw still to come, the cards were opened up:

Hellmuth was a bit peeved that he'd broken the best hand, but he was still well in front with one card apiece still coming. Ashby got the first card and he left it alone as Hellmuth got his. "I'll flip it over right away," Hellmuth announced, and he quickly showed the

. That was that. Ashby couldn't catch a better low, and he showed the

that he'd pulled in vain.

With that, Richard Ashby has been eliminated in 3rd place. It's his second final table of this WSOP, and this one likely leaves him with the same empty feeling inside. This one comes with a consolation prize of $143,000 and some change, and that should do some good in helping Ashby overcome the disappointment.

The last half hour before dinner was crammed with tons of action and it seems the dinner break did little to deter that. Within the first three hands of this level John Juanda managed to three-bet his entire stack all in against Richard Ashby. Ashby made the call and each player drew one card.

Juanda was ahead at this point but they were both drawing to a ten low. Juanda squeezed his card pretty fast and flipped up a

, making his ten low. Ashby ended up pairing his threes and Juanda doubled up, knocking Ashby down to about 210,000.

Back to the Action!

Prior to resuming play, Ty Stewart made an announcement inviting everyone around to come on down, grab a beer, and watch poker superstars do their thing on the incredible ESPN set. Cards are now back in the air as we resume three handed play! 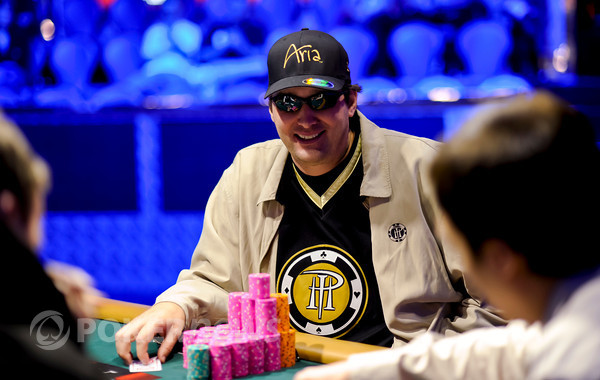 We've reached the appointed time for dinner, and the players are off for a one-hour break. Look at how the chips stack up as they walk off the stage:

We caught up with the action to see Phil Hellmuth draw two cards and John Juanda take one. Hellmuth checked to Juanda who fired out a bet of 200,000. After about four minutes in the tank, Hellmuth announced call, flipping up

John Juanda opened to 52,000 under the gun, and Steve Sung wanted to play for more. In the small blind, he shoved in for 270,000 total, and action came back around to Juanda. He'd spend a few minutes considering, eventually cutting the chips out of his stack to eye up the potential damage. He'd have 85,000 chips left if he made the call, and he eventually made the decision. He slid the 218,000 chips forward to put Sung at risk.

Sung patted, and Juanda drew one. "You have a good hand?" Juanda asked, and Sung's shrug wasn't much confirmation. "Jack?" Juanda tried again, and Sung showed his

as he threw a king into the discard pile. Let the squeeze begin.

Juanda put his head at table level to sweat, and he liked the start of it. "It's not picture," he said with a smirk. A moment later, he added, "Two across. Fifty-fifty." Then again a moment later, "Hearts." Finally, he peeled it over, and the

was not the one Sung wanted to see. It spells his elimination in 4th place, good for nearly $100,000.

After the pot, Juanda and Sung shared a long handshake and a few words and nods with each other. With that knockout, Juanda moves up to 660,000, and we're down to our final three players.

Phil Hellmuth is on an absolute tear through this event.

Nick Schulman opened the last pot to 50,000, and Phil Hellmuth three-bet to 340,000. That had Schulman covered, and he didn't waste any time calling all in for 250,000 total. Hellmuth patted, turning up the hand to beat:

. Schulman needed one card to improve his

. He squeezed it out, and it was no good. He sent the

spiraling onto the felt face-up, and a pair is not going to get it done.

With that, the 2009 champion of this event is eliminated in fifth place. He'll take home nearly $70,000, pausing to wish the table luck as he headed off to the cashier.

Hellmuth is up to about 2.4 million now with just about 2/3rds of the chips in play.

After Steve Sung made it 60,000 to go from the button, Phil Hellmuth casually dropped some pink chips in the pot to make the call. Each player took one card and Hellmuth led out for 58,000.

Sung threw in a raise, making it 150,000 total and after about a minute of deliberation, Hellmuth announced a call, tabling

. Sung threw his cards into the muck and Hellmuth scooped yet another pot.