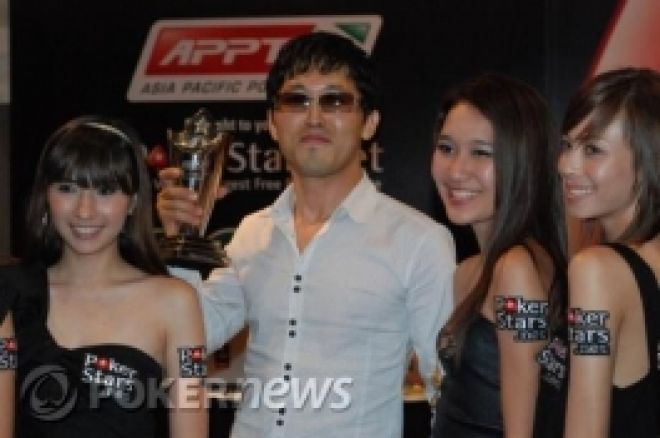 At the end of a day that began with a fight for the ages, it was Dong-bin Han’s constant, aggressive play that propelled him to become the champion of the 2009 PokerStars.net APPT Cebu main event at the Shangri-La Mactan resort in Cebu, Philippines.

The Korean poker player maintained a big stack throughout most of the final table and dominated heads-up play with a relentless assault on American David Hilton, pounding him over and over again with raises and re-raises.

It was reminiscent of the Manny Pacquiao-Miguel Cotto fight, which was shown in the tournament venue and held up the main event. Pacquiao, who had Filipinos all over the world cheering his every move, clearly dominated Cotto and the referee eventually had to stop the fight out of mercy for the Puerto Rican fighter.

Hilton, clearly rattled by the Korean dictating the pace of the match-up, showed little resistance and eventually lost when he pushed all-in with queen-jack only to be snap-called by Han with pocket queens. The board held up for Han, giving him the victory and US $148,200 in prize money while Hilton walked away with US $101,800 for his runner-up finish. Han also became the first Korean to win a main event on the APPT circuit.

That Han managed to dominate the match-up with Hilton was even more amazing considering the huge pot he lost early on during heads-up play. With a board of

and more than two million chips on the line, Han confidently showed

for the full house.

That hand gave Hilton a commanding 4,600,000 to 1,700,000 to chip lead. Unfazed, Han stuck to his game plan starting from the very next hand, pounding Hilton over and over again until he had regained the chip lead.