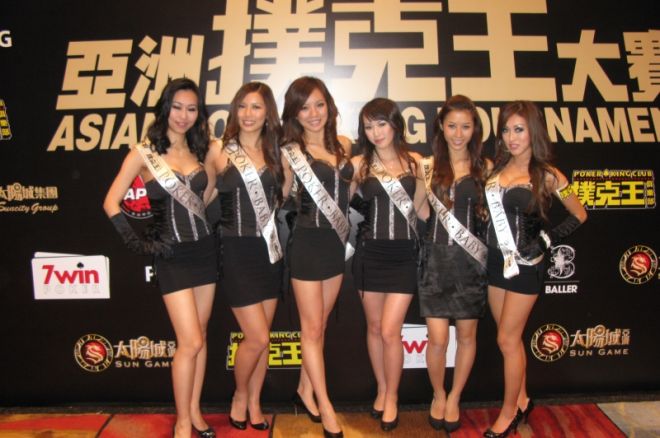 After a day filled with all-in moments and bad beats, less than a third of the field remains in the Asian Poker King Tournament at the ballroom of the StarWorld Hotel in Macau.

In just eight levels of play, a starting field of 174 players was reduced to just 49 thanks to plenty of hot and heavy action at the tables. When the dust cleared, it was Michael Kim, with a count of 208,400, who emerged as the undisputed chip leader of the Poker King Club’s first major tournament. Coming in second is Soo Bum Kim, who is second with 154,600. With a dominating lead over everybody else, the two will return tomorrow to try and take down the first prize of HK $284,200.

As is in the case in any poker tournament, there were plenty of bad beats along the way. The very first elimination of the day, though, might just qualify for one of the sickest ever in poker history.

On the very first hand of Level 1, an under-the-gun player raised to 250 and was re-raised all-in by Korean player Seung Heon Baek. The UTG player immediately obliged by calling and showing pocket kings. To everybody’s surprise, Baek tabled nothing but

With the table already in disbelief, the board made things even more ridiculous. Four hearts were dealt out, giving Baek the straight to trump the UTG player’s pocket kings. The eliminated player left the tournament area in a daze, stung from a bad beat that he’ll definitely remember for a long time.

When asked about it later, Baek revealed that he had gone all-in as part of an agreement with a group of friends. They had wanted to go out and party instead, so he did his part and pushed on the very first hand. It didn’t turn out the way they planned as Baek immediately doubled up his stack within minutes of sitting down.

There were plenty of other highlights throughout the day as well. Later in the day, another hand saw Kim Lee go all-in with

. His opponent immediately called and showed pocket kings for the set. However, an eight came crashing on the turn to give Lee the gut-shot straight and the big pot.

Poker King’s very own Winfred Yu, who made the final table at the last Asian Poker Tour (APT) Macau main event, was very pleased with the turnout. “It’s looking good so far today. We’ve got a lot of the best Asian players coming in today as well as the big group from Korea. It’s our first tournament and we went over the guarantee – that’ll definitely be good when we have future tournaments.”

He wasn’t as lucky on the felt, however. Yu was eliminated earlier in the day when he got it all-in with

. The flop brought nothing but a king on the turn gave Leung the edge. The river did not bring an ace, busting out Yu midway through the tournament.

The remaining players will return tomorrow for Day 2 of the Asian Poker King Tournament. For more information about the Poker King Club, which is located on the third floor of the StarWorld Casino, click here.