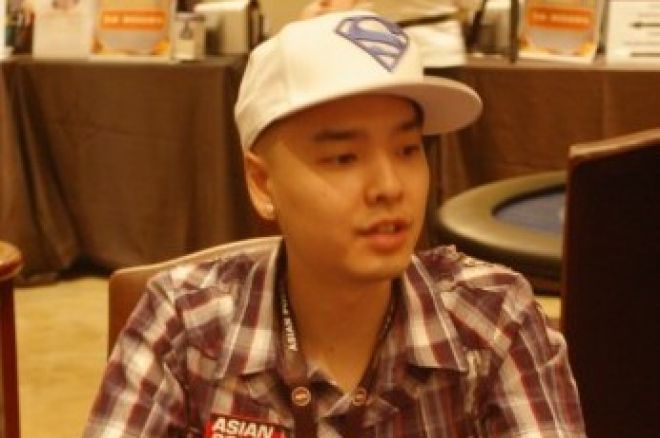 One of the most well-known players on the international poker scene is David "Chino" Rheem, an American poker pro of Korean descent. A recent WSOP main event final table member and winner of the Five Diamond Classic in 2008, Chino has accumulated more than US $4,000,000 in live tournament winnings over his career.

Asia PokerNews recently sat down with Chino in Manila to catch up with him and get his thoughts on poker in Asia.

Hi Chino. So what have you been up to? Been to any big events lately?

Well, a few months ago I spent most of my time in Commerce for the LAPC, and all The Poker Pack were all there playing most of the tournaments and the side games. That went on for about a month.

Did you manage to win?

I won one tournament; it was a triple draw deuce-to-seven event. It was a small field but it still feels good to win a tournament. I mean, a win is a win. Commerce is my home ground so it’s always good to get a victory there.

The Asian Poker Tour also sponsored the 13-card Chinese poker tournament there and it was a lot of fun. Most of The Poker Pack played in that event. LAPC is my favorite out of all the WPT stops. It’s our home ground and the cash games and side games are great there, so we all have a good time.

What do you think of the local players here in Asia?

Not to knock any Asian players out here in the Far East but many Asians in L.A. and a lot of the U.S. are probably a lot better. It’s mostly because of the experience, it’s bigger over there than it is here. A lot of the people here in Asia are still learning the game so they don’t know some of the aspects of the game. Those that already do know the game, many of them just picked it up recently so experience is definitely something that comes into play.

From what I’ve heard though the Asian players here are doing a lot better now, the level of skill has gotten a lot higher. Also, there are also a lot of really good pros here who are winning big tournaments and starting to make an impact.

Any difference in the style of play between the players here and the rest of the world?

I think so. For example, Europeans are known to be crazy and aggressive. For Asians, at least from my experience, they are really tricky. They like to gamble and they like to play a lot of pots versus you.

A lot of Asians might not have anything but they’ll still call you and check-raise you. For me I think it’s good, it’s better than just playing solid because it’s good to mix it up so that others can’t get a read on you. You can’t really underestimate Asian players when you play against them.

Obviously the big game here is Hold ‘em. Do you think all the other variations of the game that are popular in the U.S. will ever catch on here?

I hope so. Badugi, from what I was told, was invented by a Korean but they don’t seem to play it a lot here compared to the States. I hope the other games develop here, though. Hold ‘em is fun but it can get boring. If you play straight hold ‘em all the time it can definitely get boring. So you want the other games to come here.

It can only help, it can’t hurt. All of Asia is now getting into poker, if you introduce any other games it’ll probably just help it grow in popularity even more.

Check back soon for Part 2 of our interview with Chino Rheem!