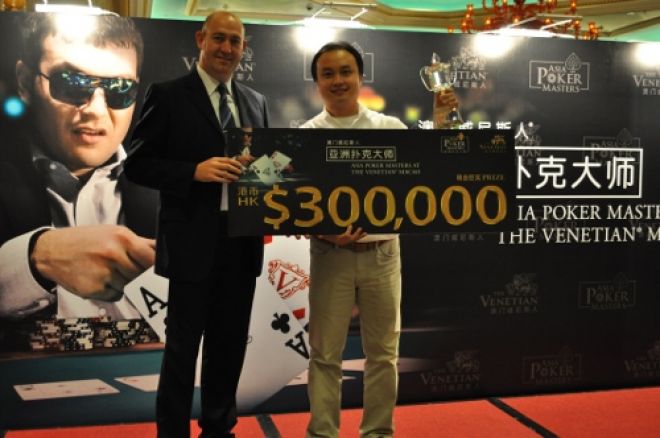 Yuen Kiong “Kenneth” Leong made history this past weekend as he became the first-ever winner of a poker tournament at the Venetian Macau’s poker room.

Leong navigated through a field of some of Macau’s most experienced players and bested Anson Tsang heads-up to win the Venetian Macau’s inaugural Asia Poker Masters tournament.

For the win, he received HK $300,000 in prize money, a sparkling new trophy, and the honour of being the first poker champion at the Venetian Macau.

A total of 116 players signed up to play in the two-day event, which took place from May 29-30. It was truly an international affair as there were representatives from Europe, HK, China, Japan, USA, Australia, and Macau.

The HK $1,000,000 guaranteed tournament saw twenty players get into the money, including some well-known names on the Macau poker scene such as Fred Leung, David Ewing, and Elton Tsang.

Here are the top ten finishers from the tournament:

For more information on poker at the Venetian Macau, click here to read the Asia PokerNews feature on the poker room.

In addition, you may visit their official web site by clicking here.