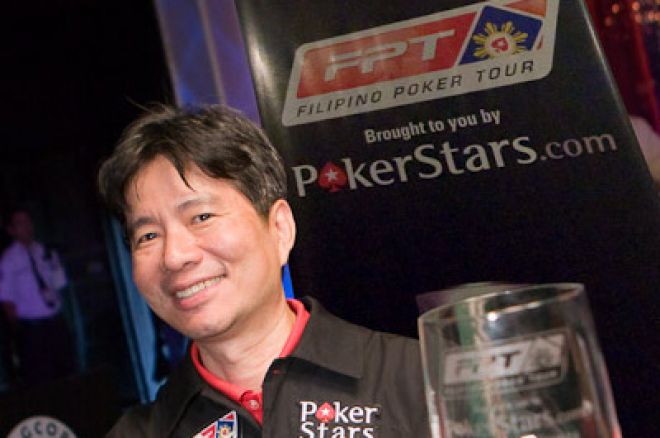 Tan was fourth in chips heading into the final day of the tournament, which started with a total of fourteen players. After losing some big pots, though, he fell all the way down to seventh in chips with 837,000 by the time the final nine were announced.

He did not give up, staying aggressive and getting a large portion of his chips by eliminating three players at the final table, including popular pro Derrick Hernandez, before finding himself one-on-one against Vic Catalan.

With the two starting heads-up play almost dead even in chips, it looked like the winner would be decided by who could make the most plays and outlast the other player. That was exactly what happened, as the two battled for a record seven hours in the longest heads-up match in Philippine tournament poker history.

Finally, at almost 10 am of the next morning, both players got their stacks all-in with Johnny having Vic covered. On a flop of

, Johnny bet out 1,000,000. Vic then declared he was all-in and everybody got up as Johnny made the instant call. Johnny flipped over

Johnny was way ahead with the two-pair and Vic would need a lot of help to stay alive. That help never came as the turn

were of no use, sending Vic to the rail as Johnny's fourth and last final-table victim. He won Php 1,100,000 for finishing as the runner-up.

One of the biggest highlights from the final table was the hand in which Tess Datu, who was playing while eight months pregnant, was eliminated.

Pre-flop, Derrick Hernandez raised to 200,000 and Tess Datu made the call. The flop came

, Tess fired out another 300,000 in chips, and Derrick decided to make the call. Finally, the river card of

was dealt. Tess then declared she was all-in for her last 867,000. Derrick tanked for a long time, agonizing over his decision, and finally declared, "Call."

Everybody in the room was in shock as Derrick showed

for ace-high, while Tess could only reveal

for the gutsy bluff attempt. Despite being eliminated after that hand, Tess certainly earned respect from opponents and spectators alike for her fearless play all throughout the event.

The FPT tournament was held at the Metro Card Club in Pasig City from July 25 to 28 and featured a guaranteed prize pool of Php 5 million. A total of 658 players showed up, boosting the prize pool to well over Php 6.5 million.

Here are the results from the final table: