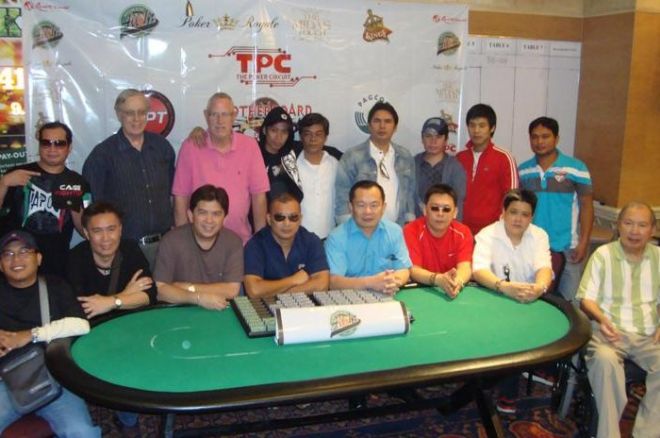 Despite torrential rains beating down on Cebu during the first two starting days, The Poker Circuit Motherboard's first leg atAll In Poker Club finished strong with eighteen qualifiers moving on to the finals at APT Philippines 2010.

Players from Cebu and the surrounding areas braved the storm to play in the leg, which was guaranteeing at least 18 players moving on to the TPC Motherboard's final round.

Only a total of 66 entries were registered for the first two starting days. The third starting day, however, saw 80 entries to boost the total to 143 entries.

"We're very pleased with the outcome considering the bad weather," said TPC founder and tournament director Lloyd Fontillas. "There was a substantial overlay but we guaranteed eighteen players in the finals from this leg and that's exactly the number that will be moving on to RWM in late August."

It was fast and furious all throughout as only 39 players made it to the second day. Finally, with 19 players left, Bong Santos decided to move in with his short stack holding

and Connie Tan made the call with

. It looked like Bong was ready to double up as the flop and turn did not bring anything. However, luck would not be on his side as a king landed on the river to give Connie the pair and making him the bubble boy.

Leading the way is Rolando Paredes, who proved that one can never be too old to play the game he loves. A 66-year-old retired doctor, Paredes won a handful of big pots throughout the first two days and ended with 449,000. In second place is John Rodger Ruiz, who is more than a 100,000 in chips behind with a stack of 310,000.

Three more TPC Motherboard qualifying legs are scheduled to take place before the finals on August 23 at Resorts World Manila: Poker Royale in Pasay City (August 6 to 9), The Midas Touch in Pasig City (August 13 to 16), and Kings Poker Sports Club in Pampanga (August 19 to 22).