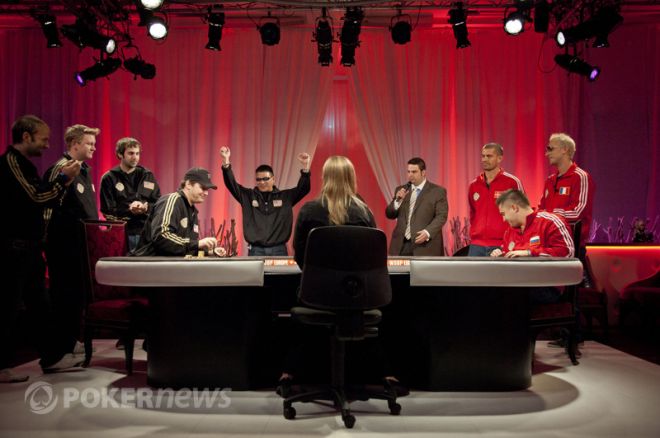 The 2011 Caesars Cup took place on Wednesday at the 2011 World Series of Poker Europe in Cannes, France. Team America was pitted against Team Europe in the second installment of this special event. In 2009, Team Europe defeated Team America at the WSOP Europe to win the inaugural cup. This year, captained by 11-time WSOP gold-bracelet winner Phil Hellmuth, Team America was looking to even the score. Bertrand "ElkY" Grospellier, who won his first WSOP gold bracelet this summer in Las Vegas, captained Team Europe.

The two teams were comosed of five players each. On Team America, Hellmuth was joined by Johnny Chan, Daniel Negreanu, Jason Mercier and Ben Lamb. On the other side, Tony G, Jake Cody, Gus Hansen and Max Lykov joined Grospellier.

The format for the contest was a very fun and interesting one, with three variants. First, two captains selected a team of two for each side. Those two teams would play against each other using the same stack and same hand, but with alternating players on each street of action. For Team America, it was Mercier and Lamb. For Europe, it was Tony G and Cody.

The structure was fast and the blinds increased every 10 minutes. Mercier put his team in a solid position early when he got all-in with pocket aces against Cody holding

flop. No help came for Europe on the turn or river and they were left with only 8,000 in chips.

On the next hand, Europe managed to double up to get back to 16,000, but they were eliminated on the hand after that when their

The second match of the contest was one between two more teams of two who were chosen by each captain. These two teams played the same stack, but alternate hands. For America, it was Negreanu and Hellmuth. For Europe, it was Lykov and Hansen. Negreanu played against Hansen and Hellmuth against Lykov.

Team America took the lead early and kept the pressure on, but a timely double up by Hansen through Negreanu gave Europe a slight chip lead. Shortly after that, Hellmuth played a hand against Lykov where he invested around 30 percent of his chips before folding on the turn. From there, Hansen made short work of Negreanu and Team America.

On the final hand of the second match, Negreanu moved all-in from the button for 55,000 with

and Team Europe evened things up at one apiece.

The third variant was a standard heads-up match. Chan was chosen for Team America and went up against the captain for the other team, Grospellier. Chan stretched out an early lead, but during the second level of the match, Grospellier doubled up to take the lead with 142,000 in chips to 58,000. Then, Chan doubled back to take the lead 108,000 to 92,000.

The blinds rose and shortly, and the average stack was just 12.5 big blinds. The two players began doing a lot of preflop shoving and that's how the match ended. Chan moved all-in from the button with

and Grospellier called from the big blind with

. Team America was able to win the flip as the board ran out

and take the match.

In the fourth match, Team America took a two-to-one lead over the Europeans into another heads-up duel. Hellmuth chose himself to go up against Lykov.

Shortly after that, Team Europe found a double up when Hellmuth jammed the button with

In the third level of the match, Hellmuth found another double after he got all the money in on the turn with the board reading

for a pair and a flush draw. Lykov held

and was drawing dead. The river completed the board with the

On the final hand, Hellmuth limped the button and Lykov raised all-in from the big blind. Hellmuth snap-called with

and the pair of queens gave Team America the win.

Since Team America won this contest, each team has now been victorious once in the Caesars Cup. With things evened up, it will be very interesting to see the rubber match take place. It was stated that whichever team won would host the next Caesars Cup on home soil, meaning that next time the meet will move back to Las Vegas.