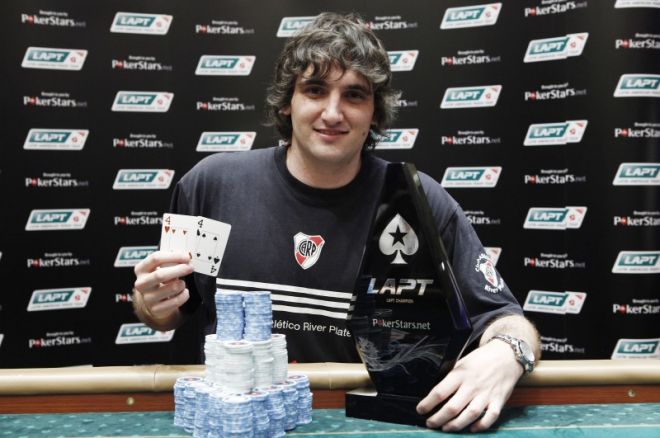 The first PokerStars.net Latin American Poker Tour stop in the South American country of Colombia proved to be more than anyone could have hoped for. The beautiful Allegre Casino in Medellin played host to what would be the largest LAPT Main Event in history with 681 players, surpassing Chile’s LAPT Vina del Mar in March (which had 621 entries). After three long days of play, Julian Menendez emerged victorious to claim the $64,710 first-place prize and become the first LAPT Colombia champion.

Usually Day 3 of an LAPT are reserved for the final table, but given the field size, there were still 28 players remaining on Sunday. The field included an American, an Australian, and many others from South America, including quite a few native Colombians. With the blinds and antes so high, it didn’t talk long for the field to whittle itself to a final table.

Here is a look at the eliminations leading up to the final table:

The chip leader headed into the final table was Jonathan Monsalves, who got a good portion of his stack on the final table bubble. It happened when Julian Menendez opened for 80,000 under the gun only to have Carlos Ponce move all-in from the button for about 600,000. When action was on Monsalves in the blind, he moved all-in over the top. Menendez got out of the way, leaving Ponce and Monsalves to do battle for the approximately 1.3 million pot.

It was a cooler for Ponce, no doubt. All he could do was shake his head as the dealer put out the

flop, followed by the

turn. "King," Ponce shouted as if trying to will the river. Unfortunately for him, it was all in vain as the

bricked. Just like that, the final table was set.

into the pocket aces of Alexis Gomez. Jairo couldn’t crack the pocket rockets and ended up finishing in ninth place. It took a long time for the next elimination to occur, but it came when Jonathan Markovitz’s

failed to get there against Stuart McDonald’s

. Not long after, Rafael Pardo was eliminated in seventh place at the hands of Gomez.

At this point in the tournament, the remaining six players opted to strike a deal, each locking up a portion of the prize pool (McDonald locked up the most with $87,129), however, there was still plenty of action to be had. As part of the deal, $14,666 was set aside to be awarded to the winner, and the players continued to battle for the LAPT Colombia championship.

After the deal was struck, McDonald took an ultra-aggressive approach, one that ended ironically. He was the first to be eliminated post-deal even though he had locked up the most prize money. It took some doing, but one by one the rest of the players fell. Gomez fell in fifth, followed by Victor Forero and Jessica Bedoya, with the latter notching the best LAPT Main Event finish for a woman (third place).

That left just Monsalves (Colombia) and Menendez (Argentina), with the latter taking a 4-1 chip lead into heads-up play. Menendez, who hails from Argentina, had an up-and-down experience at the final table, but he caught the cards when he needed them most. In the final hand, Menendez limped only to have Monsalves move all-in for about 3.2 million. Menendez carefully studied his opponent's stack before opting to call.

, offering little help to Monsalves. The

turn left him six outs to keep his title hopes alive, but the

river ended his run with a second-place finish.

The next stop on the PokerStars Latin American Poker Tour is the Grand Final, and you can be sure that PokerNews will be there to bring you all the action straight from the felt.

*Denotes prize was part of a deal.