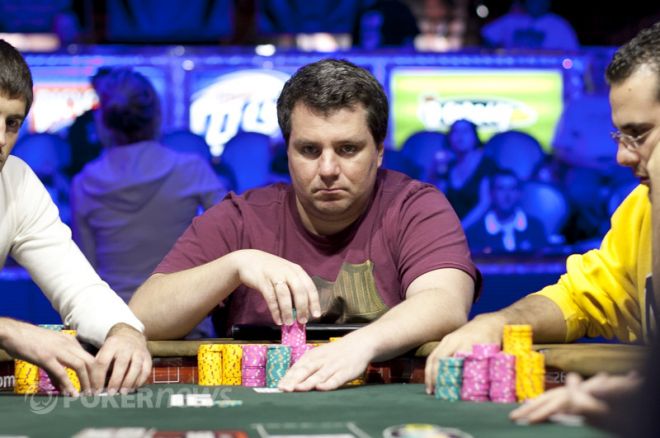 PokerStars had players seeing double on Sunday, and it had nothing to do with blood-alcohol levels. The world's No. 1 online poker room ran the Sunday Million and Sunday Warm-Up twice as part of the first PokerStars Double Vision Sunday. In all, more than $4 million was up for grabs between the four biggest tournaments available on Sunday's tournament slate.

Among the biggest winners across the online tournament scope Sunday was Kyle "knecht_poker" Knecht, who added a victory in the Sunday Warm-Up to his WCOOP bracelet from 2010. Others hitting six-figure paydays Sunday were Andrey "Kroko-dill" Zaichenko and Andrew "achen" Chen.

Thanks to a five-handed deal, five players emerged from the "regular" Sunday Million with six-figure scores. With the deal in place, the remaining players battled for the $20,000 left on the table. The U.K.'s "acozubi" took command by eliminating "AlexTz30" in fifth place, but then Andrew "achen" Chen sent the next two players to the rail to set up a heads-up match against "acozubi" for the title.

Chen held a slight lead when heads-up play began, but most of his stack was sent over to the Brit as the result of a horrific river card. With the blinds at 300K/600K and a 60K ante, "acozubi" min-raised the button and Chen three-bet to 3.3 million."Acozubi" then shoved for just over 34 million and Chen called instantly with

in bad shape. The

flop brought no help to "acozubi," but the

turn gave him a flush draw and Chen a set. The British player needed a heart on the river to survive and hit gin with the

to leave Chen with just 2.3 million. Chen was eliminated on the very next hand, giving "acozubi" his first Sunday Million title.

In the second Sunday Million of the day, a familiar online tournament name made the final table as the mysterious "Halfrek" took fourth place. After a three-handed deal, Andrey "Kroko-dill" Zaichenko emerged victorious for the day's top prize of $159,455.92.

The first Sunday Warm-Up of the day saw three notables make the final table, two of whom earned spots among the top three. Recent World Championship of Online Poker winner Vincent "Vingtcent" Van Der Fluit saw his run end in third place when he got involved in a massive pot against Canada's "inheritance." The two players got all of their chips in on a flop of

for top pair and was up against the

of the Canadian. The

on the turn gave "inheritance" a higher pair and the

changed nothing, sending Van Der Fluit out in third place with $67,039.

Kyle "knecht_poker" Knecht and "inheritance" immediately began chop talks and came to an agreement to secure six-figure paydays for both players. Knecht, another WCOOP champ, then found luck on his side by winning a flip with pocket fours against

to take the chip lead. A short time later, Knecht got aggressive with a four-bet shove holding

and found himself up against the

flop provided Knecht with some hope, and the

gave the him a winning straight and the Sunday Warm-Up title.

If you want an even more in-depth recap of the action of the PokerStars Warm-Up, head on over to PokerStarsBlog.com

Online tournament specialist Casey "bigdogpckt5s" Jarzabek left with the biggest prize in the Sunday 500, finishing runner-up for $53,570.82. "Gord0nGeck0" took it down following a three-handed deal.

Making the final table of the Sunday 2nd Chance was Vojtech "Vojta_R" Ruzaicka, runner-up in the 2011 WCOOP Main Event. He finished in third place in this one while "Rimlog" took it down for $37,872.

Although the $109 Sunday Rebuy had seven fewer entrants this week, its prize pool was bigger thanks to more rebuys and add-ons. Emerging victorious following a heads-up deal was "we different" for $53,684.70.

Up in attendance slightly from last week, the Sunday Storm continues to consistently draw more than 30,000 players each week. Following a three-handed deal, "atzektm" claimed victory for $21,729.99.

The Sunday Kickoff was down more than 100 entrants from last week. Unlike last week, however, there was no deal. "TheFan83" took it down outright for $23,787.92.