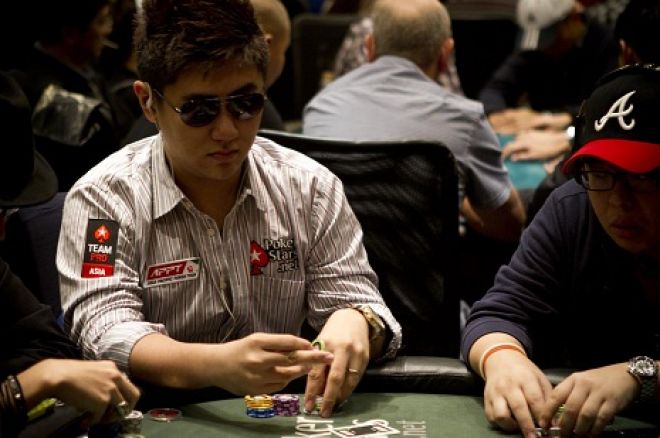 The final Day 1 flight of the 2011 PokerStars.net Asia Pacific Poker Tour Macau Main Event came to a close on Thursday. It was an exciting day of play that did not disappoint. An impressive field of 306 players turned up for Day 1b and after eight levels of play, China's Sha Jun bagged up the most chips — 169,400.

Of those players only Lin and Lykov didn't get a Day 2 berth, meaning PokerStars will be well represented in Friday's action. Huang will return as one of the chip leaders with an impressive 154,100.

Huang steadily grew his stack throughout the day, but there were plenty of big hands which added to his ever-growing stack, such as the following hand which played out late into the day.

PokerNews came to the action with the board showing

. At this point Huang led for 9,075 — a little more than half the pot. His opponent went into the tank before making the call. Huang turned over

, which quickly sent his opponents cards flying into the muck, topping off Huang's solid day of play at the felt.

The combined Day 1 flights made for a huge 575-player field, a record setting number of players, for the popular APPT stop in Macau. The last APPT Macau event to get even close to that field was in 2008 when Eddy Sabat bested a field of 538.

Day 2 is set to kick off on Friday at 1200 CST (Thursday, 2000 PDT) and PokerNews will again be on the floor at the beautiful Grand Lisboa Hotel and Casino providing updates of all the action on the felt!