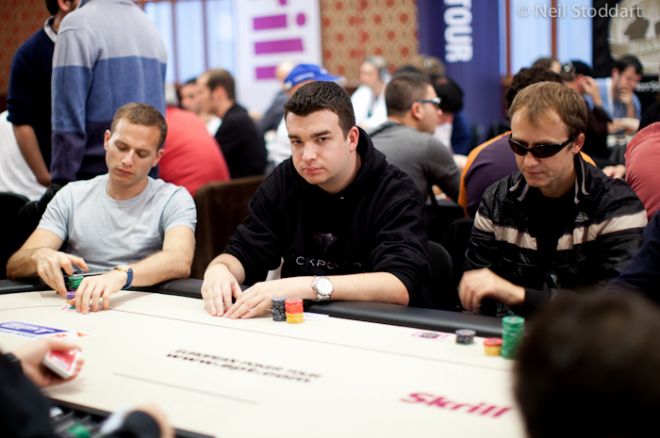 The 2011 PokerStars.com European Poker Tour headed to Prague this week and Day 1a kicked off on Monday. The first of two starting flights brought out 234 runners, capped off by the very late entry of Bryn Kenney. At the end of the day, around 140 players remained. Topping them all was Vedzizhev Beslan with 132,200 chips.

Among those who came out to play were Team PokerStars' Toni Judet, Pat Pezzin, Fatima Moreira de Melo, Rino Mathis, Theo Jorgensen, Richard Toth, Marcin Horecki, Martin Staszko and Michael Keiner. Of that bunch, only Judet and Horecki failed to make it through the day.

Other notables taking their seats at the felt on Day 1a included Steve O'Dwyer, James Akenhead, Mike Watson, Chris Moorman, Eoghan O'Dea and Michael Benvenuti. They've all made it through the first gauntlet of levels and will be back for Day 2 on Wednesday.

O'Dea lost a big pot early in the day against Raffaele Gerbi. All of the money went in on the turn with O'Dea holding a straight. Gerbi held two pair and filled up on the river to crush O'Dea. The 2011 November Niner battled back though, including a big double through Christopher Brammer when his top pair held up on the

flop. O'Dea was set all-in by Brammer, who held

river, O'Dea was back with some barking chips at nearly double the starting stack. He finished on 50,800 in chips.

The biggest name in the field came out to play after a long hiatus from tournament poker. "The Great Dane," Gus Hansen, came sporting a banana and a Bible along with his poker face. Hansen kept his nose buried in his book most of the day and didn't play the normal loosey-goosey Hansen style that we're accustomed to seeing, but he managed to finish on 52,600 in chips.

The way it looks right now, this event should easily clear 600 runners total. Today's field surpassed the Day 1a field from last year and Day 1b should mirror that. On Tuesday, Day 1b will kick off at 1200 CET (0300 PST) for another eight levels of play.