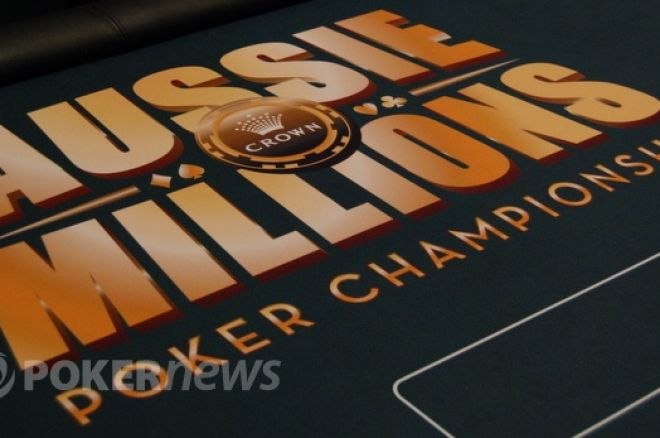 The final flight of Event 1: $1,100 Opening Event has come to an end as the largest Day 1 field so far created an almost $1 million prize pool. There were 421 players who took to the felt from noon on Saturday, with that amount easily surpassing the 274 and 251 players who participated in Day 1a and Day 1b respectively. The huge day made for a total of 946 players, creating a prize pool of $946,000.

With 66 players surviving Day 1c, there will be exactly 132 players who hit the tables on Sunday to try their hand at being crowned the champion of the Aussie Millions Opening Event. The player who manages that accomplishment will be $200,000 richer, while it is the top 81 players who will be going home with a piece of the prize pool.

The large field size on Saturday can be attributed to the unique “repechage” format of the event, with many players opting to re-enter after busting out on Day 1a and Day 1b. Among those who made multiple attempts at solidifying a Day 2 berth included Daniel Nielson, Daniel Kelly, Simon Watt and Sorel Mizzi. Unfortunately for these players, multiple attempts wouldn’t be enough to survive as they hit the rail throughout Day 1c.

The action started somewhat slowly on Day 1c as players knew that this was their last chance to make it to Day 2. It took over half the day for a clear chip leader to emerge, but eventually Jay Kinkade edged ahead of the field. Kinkade is well known for crushing online tournaments under the screen name “SEABEAST” and over the last few years has proven his worth on the live felt.

. While Kinkade held the chip lead for much of the afternoon, towards the business end of the day, all the action was occurring on the same table, with both Tony Delavinias and Rob Angood managing to accumulate huge stacks. [Removed:17] also blitzed the later part of the day to bag up the second largest stack in the room.

Some other players who also managed to accumulate a big chip stack throughout Day 1c included Octavian Voegele (116,800) and Naz Sibaei (114,800). Joining the above players on Day 2 with quite a few less chips, but still surviving include Kenna James (68,900) and Jeff Rossiter (50,000).

With all three Day 1 flights in the record books, below is a list of the players who will be starting Day 2 with the best chance of making a run at the final table.

The action on Day 2 is set to begin at 1230 AEST Sunday (1730 PST Saturday), so be sure to join us then as the PokerNews Live Reporting Team will crown a champion of the Aussie Millions' Opening Event!