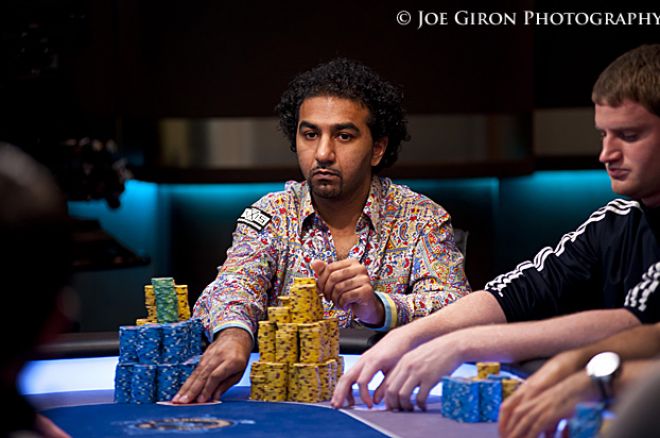 For the returning 64 players, it was just another day at the office in the 2012 PokerStars Caribbean Adventure Main Event on Wednesday. The day was short but action-packed, and at the end, 24 players remained. Leading the field is Faraz Jaka with 4.114 million in chips.

Jaka leads the rest of the field by nearly 1.5 million chips, and Alex Fitzgerald sits in second with 2.709 million. Behind him are Phil D'Auteuil with 2.28 million, Anthony Gregg with 2.142 million and Byron Kaverman with 2.136 million. Gregg is closing in on a familiar place at the PCA final table. In 2009, he placed second to Poorya Nazari and earned $1.7 million.

Jaka entered the day third in chips with 1.22 million. Just about everything that could go Jaka's way did on Day 4, and that allowed him to add nearly 3 million more chips to his pile by day's end.

One of the big, key hands Jaka played was against Martin Jacobson. With around 300,000 chips already in the pot on an

board, Jaka fired an overbet of 500,000. Jacobson tanked and tanked before he eventually made the call. When he did, Jaka tabled

for a flush and Jacobson mucked. That put Jaka up to nearly three million.

Another big hand Jaka won was when he eliminated Lawrence Greenberg. The two got all of the money in on a

board with one card to come. Greenberg held

. The river landed with the

Galen Hall, the defending champion of this event, returned for Day 4 but was the first player eliminated on the day. Just a few hands into the day, Hall was all-in preflop with

, sending Hall on his way home.

. Even though Garcia picked up a big flop when it fell

couldn't give him what he needed to stay alive.

Play will resume Thursday at 1200 EST (1700 GMT), so be sure to follow along right here as the PokerNews Live Reporting Team brings you all the action, eliminations, and drama from the 2012 PCA at the Atlantis Resort in the Bahamas.