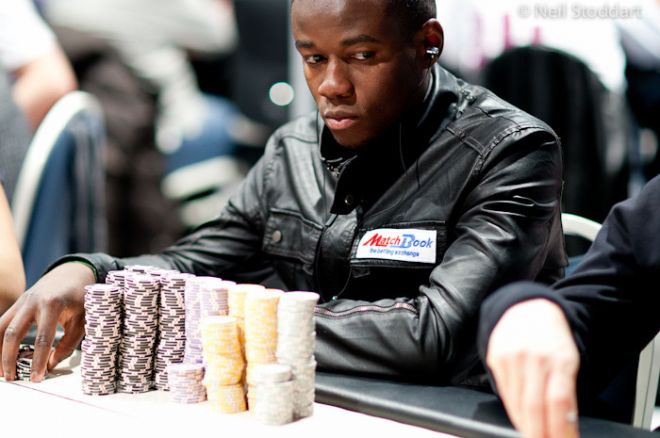 Day 2 of the PokerStars.fr European Poker Tour Deauville played out over six 75-minute levels Thursday and the field was reduced greatly. Day 1 is all about survival whereas Day 2 is seen as a day to move up through the field. The combined field of 546 returned Thursday, and that number was culled down to 178 players.

Adeniya, no stranger to leading an EPT, gets there by applying relentless pressure on his opponents. He took over the chip lead after he busted Philipe Ma over the course of two hands. Ma was caught bluffing in one hand and then ran into the Adeniya’s full-house in his exit hand.

Adeniya relinquished the lead for a while but had a storming last level. He told PokerNews that he won a 100,000-chip pot when his tens held to bust an opponent holding pocket nines. Apart from that, he won a series of small to medium pots, often forcing opponents to fold. One example of that was when he bet 8,000, 20,000, and 50,000 on a

board. His opponent finally gave up on the river.

It will come as no surprise to see Luca Pagano still in. The Team PokerStars Pro in fact the only Team Pro left, is an almost unmovable force through these stages of an EPT. He will be looking for a record extending 20th cash. He finished with 172,400 chips.

Those extra chips at the top had to come from somewhere though. Amir Salhani was the clear chip leader coming into play but he departed in four levels. Nacho Barbero lost his six-figure stack within the first level, and he was joined on the rail by Kevin MacPhee and Arnaud Mattern, both former EPT champions. MacPhee came in short and had a great chance to get back into the tournament when he flopped a set of aces, but he was helpless as an opponent made a baby flush to oust him.

Kara Scott, Praz Bansi, Christopher Mclung, Ruben Visser, and Scotty Nguyen will be missed as much for their personalities, as well as their prowess at the table.

Play will begin at 1200 CET (0300 PST) Friday and we fully expect the field to shrink enough to burst through the bubble. One hundred and twenty-eight players will be guaranteed a minimum €7,500.

To follow all the action live, as it happens, tune into PokerNews' Live Updates. Our team will be here throughout the day, bringing you all the news you need to know and more.