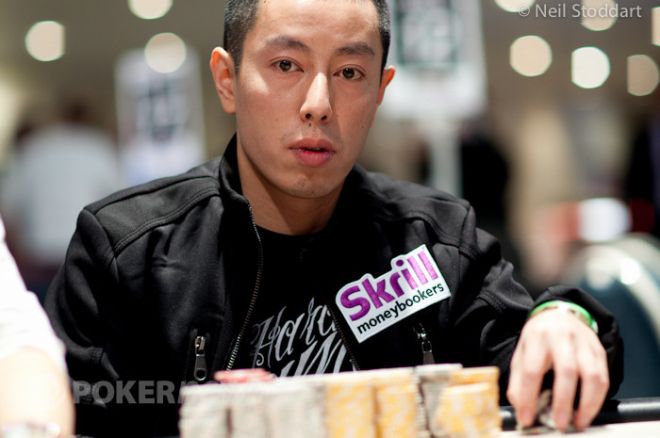 The PokerStars.fr European Poker Tour Deauville Main Event played down from 178 players to the final 54 on Friday night.

EPT London finalist Martins Adeniya came into play as the clear chip leader and a steady day kept him near the top of the counts throughout. A massive 1.5 million chip pot nearing the end of the night however, handed France’s Samphane Phomveha the overnight lead.

The 128-player money bubble was reached midway through the day’s third level and the only thing building faster than the line-up at the cash out cage following the bubble appeared to be Ondrej Vinklarek’s stack. The Czech national, who crushed the side events at EPT Prague in October, quickly became the first player over the one-million chip mark using an aggressive style of play and a little run-good. In the closing moments, he shoved king-five off-suit preflop into Phomveha’s pocket kings to hand him 1.471 million chips and the overnight chip lead.

Vinklarek wasn’t the only one with an up and down day. Frenchman Ludovic Lacay seemed to take the same line. At one point, he shot up to 950,000 and the top of the leaderboard by picking up aces against two shorter stacks with jacks and tens. But after Adeniya was moved to his table and took a chunk out of his stack, pushing him off a 200,000 pot on a four-flush board, Lacay seemed to spend the rest of the day hovering around the half million mark. That is until the late stages when Christopher Brammer rivered an ace against his pocket jacks to send him home.

Making the money certainly meant something to that group, and to the handful of PokerStars qualifiers still in when the bubble burst, but it also marked another big occasion for the final Team PokerStars Pro left standing. Luca Pagano guaranteed a record 20th EPT cash by making the money here, but picked up aces to double up soon after the bubble burst to stay alive and ended with a 344,000 stack heading into Saturday’s Day 4.