Black Friday Chronicles: Where Were You? 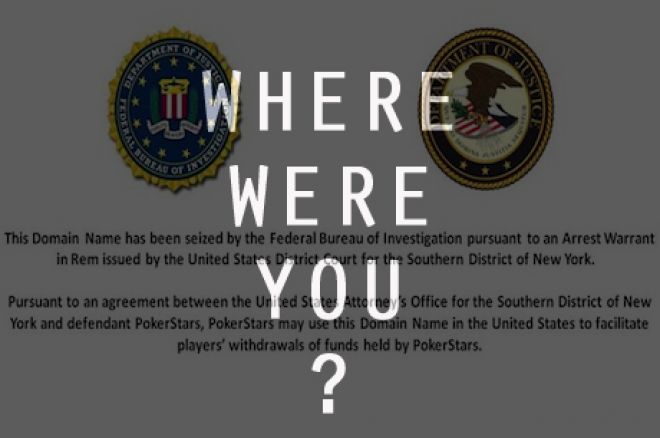 There are monumental moments in life that are so significant that the mere mention of any signifying detail of them can instantly ignite an all-sensory memory of where you were when they happened. When one such event happens that affects an entire community, it’s often comforting to share these stories. With the anniversary of the event that shook the poker industry upon us, the question we want to reflect on is: Where were you on Black Friday?

April 15, or Tax Day if you will, is one of the most stressful days of the year for many people. For me, April 15, 2011, didn’t start out that way. I had already paid my taxes, so all I had to worry about that day was getting on a plane headed for Las Vegas. The PokerStars North American Poker Tour event in Mohegan Sun had just ended, so I was carefree and ready to get home. Little did I know that it would be the last NAPT event I’d cover, and the NAPT branded hoodie I wore and backpack on my shoulders would soon become vintage items.

Just before takeoff, I received two frantic text messages from friends with the gist of the messages being, “What is going on with Full Tilt and PokerStars? I’m freaking out!”

I conversed with both of them to find out as much as I could and loaded a couple of web pages on my iPhone before the flight attendant told us to turn off all electronic devices. I read in dismay as I learned that the government had taken major steps in shutting down the world’s biggest online poker sites. For the rest of my flight, I sat with my knees to my chest, in a ball of anxiety. I may have talked to myself a couple of times, no doubt making the stranger next to me very uncomfortable.

Once my plane landed in Las Vegas, I immediately opened Twitter, looking for more information. What I gathered most, though, were player reactions. They were were confused, frustrated, and worried for their livelihoods.

The abrupt halt on online games was such a shock that many players, at first, doubted the legitimacy of the claims. One of those players was Reid Thomas, an online cash-game player, coach, and recent author of one of the most expensive poker books to date. He was given a violent shove out of vacation mode when he arrived back home to North Carolina after a bachelor party Caribbean cruise.

“Some of my poker friends, who were also on the cruise, and I were all chatting online when one of our friends mentioned that he couldn't log on to Full Tilt Poker,” said Thomas. “Another friend was saying he was playing just fine and to try restarting your computer. The tables quickly became empty. I frantically wrote down my account balances for Full Tilt Poker and for PokerStars, fearing the worst. The worst materialized before our eyes. We all knew it was coming, but why now?”

Carter King, a player who made his mark in poker by decimating online multitable tournaments and by winning the largest online poker tournament at the time — the 2008 PokerStars World Championship of Online Poker Main Event for almost $1.3 million — also met the news with disbelief.

“I was in my apartment at Panorama with Shaun Deeb, and I read a post on TwoPlusTwo saying that they went to PokerStars and saw the DOJ message. I went on mine and it still had the regular web page, so I thought it was a joke. I went to tell Shaun, and he already knew but was still logged in from the previous night. He was playing cash games with the goal to be the last American still logged on.”

Olivier Busquet was another one of many players grinding online as it happened. “I was playing on Full Tilt and actually having a pretty good day when I found out. My wife and I had a long trip planned to Europe. We were going to Italy for 10 days, and I was going to play some EPTs. We also decided to get married the Monday following Black Friday, so on a personal level, I just went on my trip, got married, and tried not to think about any of it until I got back. It was surreal until I returned home, and then, it reality hit.”

Busquet may have had a few weeks to escape from the reality of no online poker for U.S. players, but most had to face it immediately. Players reacted to the news in different ways. For King, his laid-back personality kept him calm.

“Honestly, I was mostly curious. I just wanted more information. I was always of the opinion that if poker was going to come to the U.S., fully legal and regulated, they would have to shut down the competing sites first. My reaction was almost all curiosity. I didn't have a lot [of money] on at the time and thankfully, what I did have was almost all on PokerStars. I just really wanted to see where it was going. I'm not much of a worrier especially for things that are out of my control.”

Thomas echoes much of the same sentiments as King, and is optimistic about the future of poker.

“Poker players, especially the professionals, are a resilient group of people. We have to be that way to survive the game. I felt cheated out of my money and a little dumb for having so much of it online. At the same time, all the worrying went away when I realized that none of us actually need poker to be who we are. Don't get me wrong, I love playing poker and everything that online poker affords a successful player. But in that moment, joking with my friends at how we were witnessing the worst of it and this was the story we'd tell our grandchildren, I knew that the important part of the story was that we had all met each other through this game and what was to come after the events of Black Friday.”

Although everyone’s story of what they were doing on Black Friday differs vastly, it is an event that not only changed the face of poker permanently, but also brought the community closer together. One can only hope that in the near future, we will be able to look back and ask, “Where were you when online poker was legalized in the United States?”