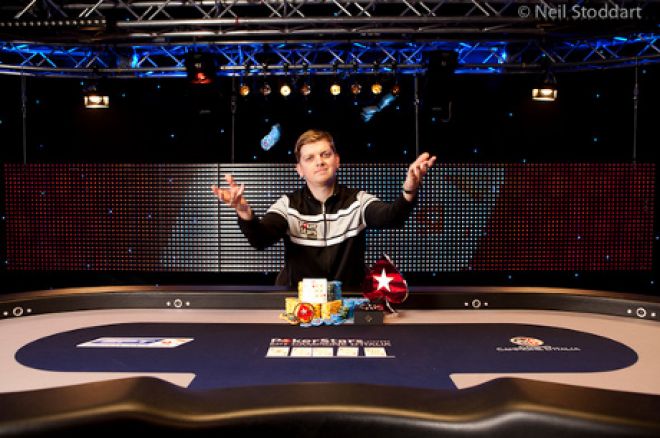 The PokerStars.it European Poker Tour Campione Main Event has come to a thrilling conclusion after Jannick Wrang bested a star-studded final table that lasted 13 hours. For his win, he took home the coveted EPT trophy, a Shamballa bracelet worth over €10,000, and of course the €640,000 first-place prize.

With the players being so deep, thanks in part to the superb structure of the EPT events and the fact Friday's Day 4 came to a conclusion in record time, it was no surprise that it took around 90 minutes for the first player to be eliminated. That dubious honor went to Sweden's Robin Ylitalo. In his elimination hand, Fabrice Soulier opened to 57,000 from the button and then Balazs Botond three-bet to 135,000 from the small blind. Ylitalo looked down at

and moved all in for 1,100,000. His shove was enough to force a fold from Soulier, but Botond had been dealt aces and made the call. The board ran out void of kings and Ylitalo was eliminated in eighth place, netting €54,000 in the process.

From that point on, there was a slow and steady stream of eliminations starting with the last standing Italian player, Stefano Puccilli, who three-bet jammed over the top of Olivier Busquet's opening raise. Puccilli was holding

, but could not out run Busquet's

Next to go was Mario Nagel, albeit three hours later, when his

. The remaining players battled it out five handed for close to two hours before Belgian pro Koen De Visscher was sent to the rail in fifth place. De Visscher got his chips in good with

but Soulier made the call with

, which spiked a hand-winning king on the turn to bust the popular player.

Four became three some three-and-a-half hours later when Botond bet 325,000 on a

fell on the turn, Wrang led into Botond with a bet of 1,100,000. Botond moved all in and was snapped off by his opponent. Wrang turned over

on the river completed the hand, leaving the field three handed.

The three players fought it out for an hour before Soulier's dreams of becoming the inaugural EPT Campione champion were dashed. His stack had fluctuated throughout the day due to his rather unorthodox style of play and he found himself in the dreaded push-or-fold territory. He looked down to see

staring back at him, a hand that he cracked aces with on Day 4, and that had been kind to him on the final table too. His seemingly lucky hand failed to help him when he needed it most because Wrang called Soulier's all in with

, eliminating Soulier, and setting up an intriguing heads-up battle between Busquet and Wrang.

Going into heads-up play, Wrang held a 10,410,000 to 6,680,000 chip advantage over Busquet, who is widely considered to be the best one-on-one no-limit hold'em player in the world. The pair tussled for a while before a scheduled break halted proceedings momentarily. When the players came back from the break Wrang had opened up a 12,890,000 to 4,200,000 chip lead.

and Wrang made the call with

The EPT's next stop is in Berlin from April 16 through 21. The PokerNews Live Reporting Team will be there and we hope you will be too.