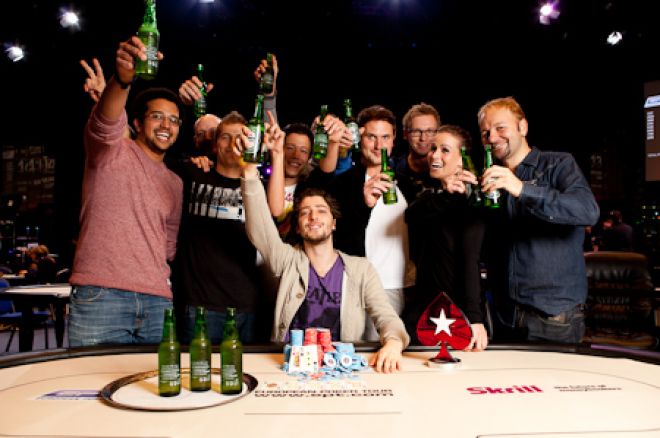 The PokerStars.com and Monte-Carlo® Casino European Poker Tour Grand Final €25,000 High Roller was completed on Tuesday night and Igor Kurganov emerged victorious to win the €1.08 million first-place prize. To win the event, Kurganov had to defeat one of the greatest players in the game, Team PokerStars Pros Daniel Negreanu, in a heads-up battle that went back and forth.

When the final table began, this week's wonder boy Justin Bonomo led the way by a big margin. He had nearly double the chips that anyone else had at the final table to start the day. The other Team Pro to reach the final eight, Max Lykov, brought up the rear.

. Following that, Negreanu eliminated Nathan Schoo in seventh place after Noah Schwartz did most of the dirty work by crippling Schoo. Then it was Schwartz's turn to fall in sixth place after his flopped two pair couldn't hold up against Philipp Gruissem's flush draw.

Falling in fifth place was Artem Litvinov. He was all in preflop with pocket jacks and behind the pocket queens that Bonomo held. The board ran out

and Litvinov headed to the rail before four-handed play began.

Things lasted a while between Bonomo, Negreanu, Gruissem and Kurganov before the tournament finally had its fourth-place finisher. That player was Bonomo as he fell in Level 25 to Negreanu with the blinds at 25,000/50,000/5,000.

On the button, Negreanu had raised to 100,000. Bonomo reraised all in from the small blind for around 500,000 and Negreanu made the call with

, but couldn't hold on as the board ran out

Shortly after Bonomo exited, Gruissem headed out the door. He, too, was eliminated by Negreanu, although this time Negreanu held the best of it going in with two black kings against Gruissem's

and Gruissem was out the door.

When heads-up play began, Negreanu held the edge with 3.9 million in chips to Kurganov's 2.75 million. From there, it was a back-and-forth battle that saw the lead change a few times before Kurganov finally started to pull away.

and got all the money in against Kurganov's

. The aces held and Kurganov surged into the lead. Then, Negreanu had to make a big fold after committing a lot of chips to the pot on a

On the very next hand, Negreanu moved all in from the button for six big blinds and Kurganov called with

. The flop gave Kurganov the lead with the

on the turn and

on the river officially ended things.

This wraps up PokerNews' coverage from Monaco for the EPT Grand Final. It also wraps up our coverage from Season 8 of the EPT. It was another very, very successful one and we can't wait until Season 9 kicks off in Barcelona in August. Until then, stay tuned to our live reporting pages for coverage of events from all across the globe. We'll see you next time!