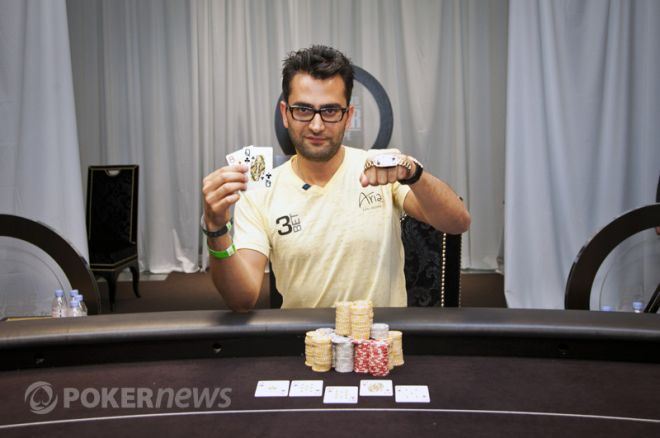 The fifth day of action from 2012 World Series of Poker Europe continued on Tuesday and what a day it turned out to be. Antonio Esfandiari, the winner of the biggest buy-in poker tournament in history (The $1,000,000 Big One for One Drop) and all-time WSOP money winner, continued to run red hot and captured his third bracelet along with the WSOP Player of the Year lead. Also, many pros finally arrived in Cannes to take their shot at WSOP gold including Daniel Negreanu, Dan Smith, Kyle Julius, Mike McDonald and Mike Watson.

Check out these stories and more as reported in our coverage sponsored by PartyPoker.

On Tuesday, the second bracelet winner of the 2012 WSOP Europe was crowned as Antonio Esfandiari defeated a field of 626 players to capture the Event #2: €1,100 No-Limit Hold'em title, the accompanying €126,207 first-place prize and his third gold bracelet.

Esfandiari entered the final table with the chip lead and was primed to capture his third bracelet, but he was joined by some stiff competition including five Frenchman looking to become the first ever to win a bracelet at the WSOP Europe. After Day 1a chip leader Ashly Butler was sent home in seventh place, the clock ticked over to Level 21 and that is when action folded around to McLean Karr on the button and he moved all in for right around 170,000. Esfandiari then moved all in over the top from the small blind, the big blind got out of the way, and the cards were flipped on their backs.

Even though he was behind, Karr was all smiles and joked with his friend. "That's not a good flop," Karr quipped when the dealer put down the

. "Jack," Karr said in hopes of picking up an open-ended straight draw. "OK, now a jack," he added after the

turn gave him a gutshot. Unfortunately for him, it wasn't in the cards as the

blanked. Karr shook hands with Esfandiari and then exited the stage in sixth place, good for €24,309.

Esfandiari, who by this point had taken over the WSOP Player of the Year lead, managed to make it all the way to heads-up play against Frenchman Remi Bollengier. Esfandiari was searching for his third piece of WSOP gold, while Bollengier hoped to become the first French player to ever win a WSOP Europe bracelet. Esfandiari held a slight lead when the match began, and he never relinquished it on his way to victory.

In the final hand, Esfandiari opened for 33,000 on the button and was called by Bollengier, bringing about a flop of

turned, Bollengier check-called a bet of 126,000 and then checked the

river. Esfandiari took about 15 seconds before announcing that he was all in, and Bollengier, who had 525,000 behind, shifted in his chair. The Frenchman tanked for a solid five minutes before whispering, "I call."

and immediately headed over to his supporters on the rail to celebrate. Bollengier's face said it all as he sheepishly flipped over

Day 2 of Event #3: €5,300 Pot-Limit Omaha began with only 25 players, but it was far from easy for the nine finalists to reach that last table. French pro Roger Hairabedian emerged as the chip leader followed by the dangerous Ville Mattila. However, Michael Mizrachi is the story of this final table as he will be trying to win his second bracelet of 2012, and also second bracelet at the WSOP Europe in back-to-back years. Joe Hachem, the 2005 WSOP Main Event champion, also reached the final table.

Erich Kollmann started the day as chip leader, but just about everything went wrong for the Austrian. After bluffing off some chips he got himself involved in a huge pot against Mattila. In a limped pot, Kollmann fired out 4,000 on an

flop, and Mattila was his only caller. On the turn, the

and Kollmann moved all in for 45,000. Mattila called with a set of kings and that beat Kollmann's set of eights.

Bruno Fitoussi made the 2012 WSOP $50,000 Players Championship final table, where he was the first to be knocked out. On Tuesday, he bubbled the final table finishing in 10th place when he ran into Mizrachi's aces and he failed to improve. Here's a look at the final table that will play down to a final table on Wednesday.

Day 1 of Event #4: €3,250 No-Limit Hold'em Shootout ran into the early hours of the morning on Wednesday, but it was well worth it. From the original starting field of 141 players, an extremely stacked field of 20 remain. Due to the shootout format of this event, all of the advancing players will take approximately the same amount of chips into Day 2, but one player stands out slightly above the rest. Phil Hellmuth, the 12-time WSOP gold bracelet winner, bagged up 71,775 due to his table having an extra player to start the day.

Numbers were down a lot for this event, but the WSOP staff was quick on its feet with making an adjustment to the structure in order to best accommodate the field. Instead of a three-day event, this event will now end on Day 2. The 20 players who have advanced will play a regular, multi-table tournament format down to one winner. As it stands after Day 1, all remaining competitors are in the money, earning at least €5,428.

The field was scattered with pros and notable faces, but not all of them could advance. Of those to bust were Erik Cajelais, Andrew Lichtenberger, Dan Smith, Jean-Robert Bellande, Will "The Thrill" Failla and defending champion Tristan Wade.

Wade was eliminated in a three-way, all-in clash involving himself, Thomas Wahlroos and Manig Loeser. The three players got the money in preflop and Wade's

. Loeser had the most chips and busted both players after the board ran out

Some of the players moving on to join Hellmuth are Matt Stout, Chance Kornuth, Dan O'Brien, Daniel Negreanu, John Monnette, Faraz Jaka, Mohsin Charania, Oleksii Kovalchuk and Dominik Nitsche. That's quite an amazing field that's left, which should set things up for one outstanding final table and conclusion to this event.

Play is scheduled to resume at 1400 CET (0800 ET). You can find all the live updates right here on PokerNews, so please be sure to join us when the cards get in the air. This is one you won't want to miss!