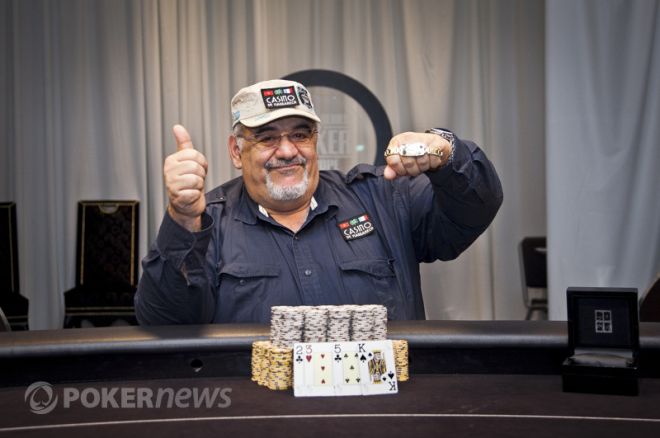 The 2012 World Series of Poker Europe continued on Wednesday with its sixth day of action, which featured the conclusion of two events and the start of another. It was a day of action as a star-studded final table returned in Event #3: €5,300 Pot-Limit Omaha, but by the end of the night an unlikely player emerged victorious; meanwhile, the Casino Barrière played host to the ever-popular Event #5: €10,450 Mixed Max — No-Limit Hold'em and was the scene of a 20-person shootout. All those stories thanks to PokerNews' coverage sponsored by PartyPoker.

The first pot-limit Omaha event of the 2012 World Series of Poker Europe attracted 97 players and after three full days of play, Roger Hairabedian was able to rise above the field to claim the €142,590 first-place prize become the first French winner of a WSOPE bracelet.

On Wednesday, the final table of nine kicked off and included some familiar faces including Jason Mercier, Michael “The Grinder” Mizrachi and 2005 WSOP Main Event champ Joe Hachem.

Mercier was the first casualty of the final table when he entered a pot with Mizrachi and Jussi Nevanlinna. The flop came

and all three players checked. The

finished the board. Mizrachi checked and Nevanlinna bet 60,000. Mercier called off his last 58,000 and Mizrachi folded. Nevanlina showed the

for quad nines and Mercier flashed

for tens full of nines before mucking his cards and exiting the tournament area in ninth place.

Hachem had a relatively quiet day compared to the rest of the table and could never seem to get anything going. In a pot with four players to the flop, Hachem bet pot for 24,000 with the flop reading

. Ville Mattila raised to 96,000 and the rest of the table folded. Hachem committed his remaining 4,500 and was all in holding

for top set. The turn and river were of no help and Hachem was forced to settle for a sixth place finish.

for a full house of treys full of sevens, and Hairabedian held

and was looking to improve. Hairabedian did exactly that when the

spiked on the turn, giving him sevens full of eights and the better full house. The

fell on the river and Mizrachi exited the tournament area as our third place finisher.

The grueling heads-up match lasted several hours, and Hairabedian was able to slowly chip away at Mattila's stack. Eventually Mattila moved his final chisp all in on a board that read

for kings up. Hairabedian held the superior hand, however, as his

made a flush on the turn. The

hit the river and Mattila was eliminated from the tournament.

The €3,250 No-Limit Hold'em Shootout has gone back and forth with scheduling over the past two days. At first, it was a three-day event, then organizers changed to a two-day event. Now, it's back to a three-day event due to action running too late on Day 2.

When Dan O'Brien got heads up with Giovanni Rosadoni, it looked at first like it was just going to be a walk in the park for O'Brien. He chipped away early and had his opponent down to under 10 big blinds. The tides changed, though, and before O'Brien knew it, he was being pounded by the waves of Rosadoni.

Pot after pot went Rosadoni's way, and O'Brien looked to be getting tired. Then, the tournament officials stepped in and informed the players that the casino needed to close its doors at 0500 CET. That meant play would need to be halted at 0445 CET, which was about 30 minutes away. The two players played through and when things ended for the night, Rosadoni had the lead. He bagged up 787,000 in chips to O'Brien's 490,000, and the two will return on Thursday at 1500 CET (0900 EDT) to finish it out.

Following the conclusion of play on Thursday, PokerNews will have the entire recap of the action. Be sure to stay tuned for all of the coverage.

One of the WSOP Europe's most popular tournaments kicked off on Wednesday when 96 players took their shot at a mix-max title. After eight levels of play, only 52 remained with Jennifer Tilly finishing as the far-and-away chip leader with 218,000 chips. Asked about how her day went she just said, “I got lucky!” Ashton Griffin quickly piped in and said that she played great as well as getting lucky.

The tone of Tilly’s day was set very early on when she eliminated Eugene Katchalov in the first level when her set of jacks bettered his set of eights. From there she never looked back as she eliminated player after player. If she didn’t have it, she made it; if she did have it, they paid her off, and if they were bluffing, she sniffed it out. She basically just had one of those days poker players dream of.

As far as Rettenmaier was concerned, he got many of his chips off of Isaac Haxton. It happened when the two saw a

flop with Justin Bonomo, who fired out 1,250. Haxton raised to 4,000 and Bonomo folded after Rettenmaier called. The turn brought the

and Haxton bet 8,200, then Rettenmaier went into the tank before eventually calling. The

fell on the river and Haxton bet his last 15,000 and was snapped off by Rettenmaier who had filled up with

for straight and made his exit.

Event #5 will resume at 14:00 CET (0800 EDT) on Thursday where the tournament format moves on to the next stage. It’s all about action-packed 6-max, and play will continue until just 16 players remain. From there the tournament moves into a heads-up format.