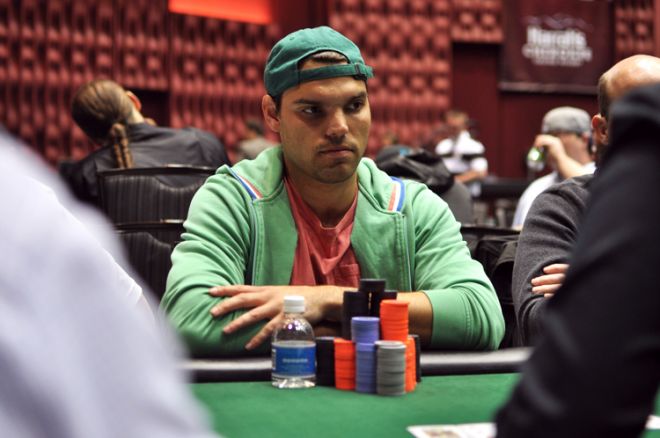 The 2012-13 World Series of Poker Circuit season continued on Friday with Day 1a of the Cherokee Main Event. A total of 354 players registered, and leading the remaining 83 survivors is David Nicholson. Nicholson, a three-time WSOP-C ring winner, bagged 260,400 chips thanks to a late-night surge.

The day began with a “shuffle up and deal” from North Carolina grinder Ken “Teach” Aldridge. Aldridge, who won a WSOP bracelet in 2009, highlighted the popularity of poker in this region in a short speech. Unfortunately for Aldridge, he was unable to survive the day, busting in Level 6.

Unlike Aldridge, fellow North Carolinian Chris Bell got off to a very hot start, winning a massive three-way all in. Bell was one of the first players to cross the 100,000-chip threshold, but it was all down hill from there. After losing a series of pots and eventually dipping below the starting stack, Bell was eliminated in the last level of the evening.

Other players who were unable to survive Day 1a include Carter Phillips, Nelson Robinson, Kirk Shelmerdine, Yuval Bronshtein and Chris Trotter. Trotter fulfilled a lifelong dream of his when he was mentioned in the PokerNews Live Reporting blog, but he was unable to win a flip for his tournament life. We expect Trotter to return tomorrow to battle it out for his first ever WSOP-C ring.

Bronshtein misclicked against WSOP-C Choctaw Main Event winner Cary Marshall, and found himself all in and at risk with ace-high on a king-high flop. Marshall held a king, and held when the turn and river both bricked.

While some failed, others prospered. David Nicholson, Kyle Cartwright, Claudia Crawford, Greg Jacobson, and Matthew Emmel all bagged sizable stacks. Crawford got off to a bit of a slow start, until she found a fortuitous double through Larry Gurney. After cold-calling a three-bet from Gurney preflop, Crawford moved all in with a club draw on the flop. Gurney called with pocket queens, and rather than make her flush, Crawford went runner-runner to make a straight.

Crawford then went on to win a sizable pot off Alex Moore. Faced with a bet of 23,400 from Moore on a

board, Crawford moved all in. Moore folded, and Crawford showed a king for second pair. Crawford bagged 215,300 chips, and is looking to best her 10th-place finish in the WSOP-C Hammond Main Event.

Crawford was on the losing end of the most interesting hand of the day. In Level 11, all nine players on Table 33 saw a flop of

Undoubtedly the biggest name in the field today was 2004 WSOP Main Event winner Greg Raymer. Raymer was plugging along with the starting stack for the majority of the day, until he shipped a massive double up in Level 14. Jerry Barlow moved all in on a ten-high flop over a bet from Raymer, and Fossilman snapped it off with two aces. Barlow sheepishly showed two deuces, and the aces held. Raymer bagged 125,600 chips.

Day 1b of the WSOP-C Cherokee Main Event will begin on Saturday at 12:00 EDT. Be sure to check out all of your exclusive live updates right here on PokerNews.com.