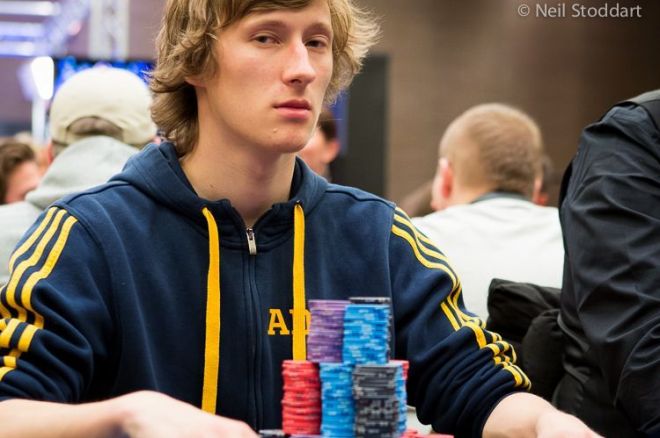 From the start, the action on Day 2 of the European Poker Tour Berlin was fast, and new heroes emerged through a tangle of major clashes and coolers. The player who survived best and sits atop of the pile is Aku Joentausta, who bagged up 751,300 in chips.

Joentausta navigated steadily to the top through a number of medium-sized pots. PokerStars Team Pro Jake Cody felt the Finn's force when all in with a dominated ace. Joentausta flopped two pair and it was good game for the triple crown winner. Then, Joentausta vaulted into the chip lead when he turned a straight to bust fellow countryman Janne Nevalainen who had flopped trips. He held, and increased his strangle-hold through to the end the sixth and last level of the day.

The player of Day 1b was Michael Mizrachi, and he shined ever-so-bright again today before he burned out in style. "The Grinder" flopped the nut flush in a hand versus Khiem Nguyen and was all set to win a 500,000-chip pot only for the latter to turn a full house and take all of Mizrachi's stack. Nguyen maintained a big stack and finished on 490,800.

Last season's champion, Davidi Kitai, came back with work to do today and he worked his 32,000 stack very well. One of the hands of the day saw him double up versus another former EPT champion, Benny Spindler. Both flopped sets (Spindler the bigger) only for the reigning champion to turn quads to destroy the German and his stack. Kitai will have 282,100 to work with on Day 3.

The focus on Wednesday turns to the 175 or so players that remain and the bubble that'll probably burst at some stage. As ever, play will start at 12:00 CET time and the PokerNews live reporting team will be on hand to bring you all the action.

In the meantime, check out Sarah Grant's interview with last year's champion: