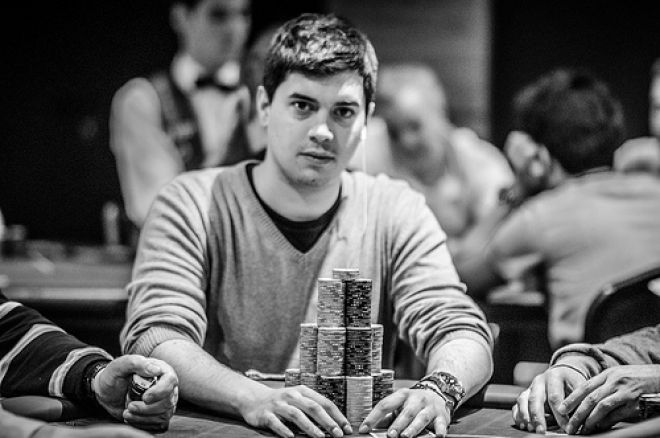 Season XI of the World Poker Tour continued on Monday, and after Day 3 of WPT Barcelona, Sergio Fernandez leads the remaining 13 players with 1,268,000. Fernandez, who started the day with just 66,000 chips, was the overall chip leader entering into Day 2. The local player bounced back in a big way on Day 3, and is looking to take down the title in his home country.

A total of 42 players returned for Day 3, and only seven players un-bagged less chips than Fernandez. According to the WPT Live Updates Team, the Spaniard got off to a quick start however, tripling up with pocket kings. He held against Jari Mahonen's pocket queens and Nikolaus Teichert's pocket deuces, rocketing up to 210,000 chips.

Fernandez then took a nice-sized pot off of Bryn Kenney, leaving the American both confused and upset. With the blinds at 1,500/3,000/500, Lukas Berglund opened to 9,000 from under the gun. Kenney called on the button, Fernandez defended his big blind, and the flop came

completed the board, both players checked, and Fernandez opened up

for a pair of fours. Kenney mucked, and then the two exchanged a few words.

Fernandez later eliminated Kenney, when Kenney four-bet all in preflop holding king-jack. Fernandez snapped it off with pocket aces and held, increasing his stack to over 800,000 chips.

The Spaniard crossed the million-chip mark when he won small race against Atanas Gueorguiev. Gueorguiev moved all in for his last nine big blinds or so with queen-ten, and Fernandez called with pocket sixes. The sixes held, eliminating Gueorguiev, and Fernandez was over seven figures. He finished the day by busting Kevin Vandersmissen and Timothy Harold, and bagged over 1.2 million chips.

While Fernandez was the only player to bag more than a million chips, Chanracy Khun was able to accumulate over 800,000. During the last level of play, Khun played a very large pot against Frenchman Manuel Bevand. With the blinds at 2,500/5,000/500, Bevand limped in from the small blind. Khun raised to 21,000, Bevand called, and the flop came

completed the board, and Bevand checked a third time. Khun moved all in, and more than five minutes later, Bevand called. Khun showed

, and Bevand was forced to show

The bubble burst in Level 15, but not before the eliminations of Henri Benoni, Ognjen Sekularac, Terry Flood, Pedro Galan, Nikolaus Teichert, David Boyaciyan, and Steve O'Dwyer. O'Dwyer, who was celebrating his birthday on Monday, found himself all in and at risk preflop holding pocket nines. Harold had him crushed with pocket kings, and O'Dwyer was unable to catch up.

Raul Paez was the eventual bubble boy when he lost a race for his tournament life against Khun. Paez's ace-queen was slightly behind Khun's pocket sevens, and the sevens held.

Day 4 action will resume on Tuesday at 14:00 CET. Stay tuned to PokerNews for a recap of the action once play has been completed.