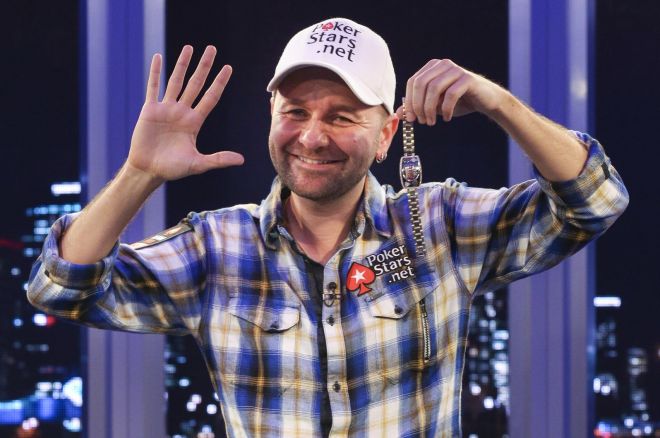 Daniel Negreanu spent five years trying to win his fifth World Series of Poker gold bracelet. According to Negreanu, it was worth the wait to win the inaugural WSOP Asia-Pacific Main Event in Melbourne, Australia, early Tuesday morning.

The victory tied him with the likes of Stu Ungar, John Juanda, Jeff Lisando, Allen Cunningham, Scotty Nguyen, and others in the WSOP record books with five bracelets.

Negreanu put an end to a frustrating half decade of close calls at the WSOP that included a runner-up finish to Barry Shulman at the 2009 WSOP Europe Main Event. He said afterward that everything about his fifth bracelet was significant, but winning the inaugural Main Event in Australia made it extra special.

"A million dollars doesn't suck either," he added.

Spindler began the day with the chip lead, but Negreanu stormed out to the top of the leaderboard during the first level. One of the first big pots came against Spindler, creating a huge shift in the ranks. Kahle Burns opened with a raise to 40,000 and Negreanu called, prompting Spindler to three-bet to 150,000 from the big blind. Burns folded, and Negreanu called to see a flop of

fell on the turn and Spindler check-called again, this time for 444,000, creating a huge pot before the dealer rolled out the

on the river. Spindler checked over Negreanu, who bet 604,000 and Benny went into the tank.

"Do you have king-queen?" he asked Negreanu.

Spindler thought for little while longer before giving up his hand, and Negreanu scooped an enormous pot to snag the chip lead. He never looked back.

2012 Octo-Niner Thomas was the first player sent to the rail at the final table. Thomas, who was the chip leader with 15 remaining in this event, was among the short stacks entering the final table and he was unable to find a spot to chip up. On his last stand, Thomas three-bet shoved over the top of a raise by George Tsatsis for around 400,000. Thomas discovered that his

was trumped by the

board eliminated Thomas in eighth place for AUD$82,721.

After the players took a one-hour dinner break, two players immediately hit the rail on back-to-back hands. First, the animated Mikel Habb moved his short stack all in with the

and Yu called with the

board gave Yu the winning pair of aces, and Habb made his way over to Lynn Gilmartin for an interview before collecting his AUD$107,730.

On the next hand, Spindler moved all in preflop for 535,000 with the

, and Burns decided to call with the

have Burns a stranglehold on the hand, and neither the

river would save Spindler. The German pro had a disastrous day but shook the hands of each of the remaining players before exiting the tournament area in sixth place for AUD$146,205.

Despite adding Spindler's chips to his stack, Burns eventually crashed in fifth place for AUD$201,994. The Crown Casino regular got the last of his chips in preflop with the

. Both players looked surprisingly relaxed as the dealer fanned a

flop, which gave Burns a gutshot draw. The

on the turn changed nothing, and the

on the river put an end to the Aussie's tournament.

The running joke at the final table became the "nine lives" of Yu. Yu won seven all-in confrontations at the final table (and chopped another) to stay afloat for several hours, the most memorable win coming against Negreanu. Yu moved all in for 400,000 preflop with the

, and action folded over to Negreanu, who slowly pealed his cards one at a time. The first was an ace... and the second one matched. Negreanu snap called, and Yu was at risk again.

, giving Yu a flush draw, and Negreanu began cheering for a spade to add some excitement to the moment. Sure enough, the

hit the turn, but Negreanu suddenly had a draw to a higher flush with his

on the river allowed Yu to survive again, and Negreanu's stack's took a small hit.

arrived on the turn. Negreanu checked again, and Tsatsis bet 510,000. Negreanu responded with a check raise for all of the chips, and Tsatsis paused momentarily before committing the rest of his stack.

Negreanu was in danger of doubling the local Aussie player, but a miracle

spiked on the river to eliminate Tsatsis in fourth place for AUD$284,715.

"Get it in bad, get lucky. That's fun, too!" Negreanu said as he raked in the biggest pot of the tournament to that point. He was sitting on 9 million in chips, while Yu and Marton had 3.3 million combined.

Yu's tournament life eventually ended after his ninth all-in confrontation at the final table. Yu raised his button to 150,000, and Negreanu called from the big blind. The

flop generated fireworks as Negreanu checked, Yu moved all in, and Negreanu beat him into the pot. Daniel showed the

for a flopped flush, and Yu needed to go runner-runner with his

to remain in the tournament. The

turn sealed it for Negreanu, and Yu's valiant effort at the final table netted him a payday of AUD$423,225.

That left Negreanu holding a 10-to-1 chip lead over Marton, but the match didn't go as smoothly as he would have liked. On Hand No. 200 of the final table, Marton raised his button to 125,000, and Negreanu reraised all in. Marton called instantly.

Negreanu begged for it to end right there, but the

flop did anything but that, giving Marton an open-ended straight draw along with his overcards. The

hit the turn, leaving Negreanu one card away from the title, but Marton made a straight on the

river and the match pressed on.

The drama continued moments later when a misstep by Marton nearly gave him another double up. Negreanu raised to 125,000, and Marton responded by shoving for 1.7 million more. After getting a count on Marton's stack, Negreanu called and discovered he was in great shape to close it out.

Marton picked up some outs on the

flop, and he spiked his gutter ball on the

turn, causing Negreanu to kick the table in frustration. He was so irritated that he didn't even notice the

hit the river, giving the players each half the pot.

The match continued until Negreanu was finally able to seal it 11 hands later. Marton put in his standard raise to 125,000, and Negreanu moved all in. Marton called, and it was off to the races.

Negreanu decided not to call for cards this time as it had burned him in prior hands, and the dealer rolled out a

flop. That was safe for Negreanu, as was the

turn. He was one card away from the championship, and the

on the river put an end to a nerve-racking heads-up match for the now five-time bracelet winner. Negreanu seemed more relieved than excited at first, but the happiness poured out of him when he held his bracelet for the first time.

That brings an end to our coverage of the 2013 World Series of Poker Asia Pacific from Crown Casino in Melbourne, Australia. The next WSOP event will be held in May, and PokerNews will be providing official live updates from every event at the Rio All-Suite Hotel and Casino in Las Vegas!