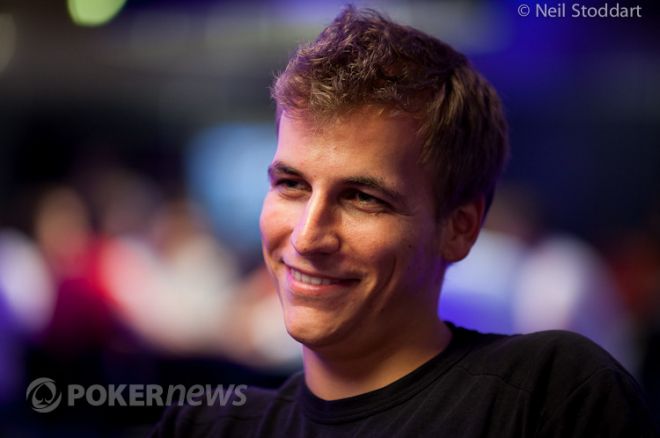 German poker pro Philipp Gruissem added another massive high roller score to his exceptional résumé on Sunday, winning the World Series of Poker Asia Pacific $50,000 Re-Entry High Roller for AUD$825,000. Gruissem bested a tough field of 44 total entries and capped it off with a come-from-behind performance against Joseph Cheong during heads-up play.

While the tournament didn't qualify as a bracelet event, Gruissem was all smiles after his victory. It marked his second six-figure score at the Crown Casino in 2013 alone. Earlier this year, he took second in the Aussie Millions $25,000 Challenge for $197,000. He's also made high roller final tables at the PokerStars Caribbean Adventure, World Series of Poker Europe, EPT London and EPT Monte Carlo over the past two years.

Gruissem busted early on Day 1 of this event but decided to re-enter, a decision that paid off handsomely. The German's total live tournament winnings now exceed $4.8 million, almost all of which can be traced to events with buy-ins of $25,000 or higher.

Here's a look at the results from Sunday's final table:

Day 2 of the High Roller began with 11 players trying to sneak into the money and avoid a AUD$115,000 bubble, one of the biggest of the year. Falling short of the televised table early on Sunday were Joe Hachem (11th), Jonathan Duhamel (10th), Devan Tang (9th) and Kyle Cheong (8th), and after Cheong's exit the remaining seven players made their way to the TV table set to be filmed by ESPN. But one player would still fall short of making any cash.

Marvin Rettenmaier was on the short stack most of the day and was unable to get a much-needed double to stay alive. He got the last of his chips in the middle by three-bet shoving with

and Cheong called with

flop gave Cheong several addition outs for the win, and he took the lead when the

hit the turn. Marvin still had out to a Broadway straight but the

on the river didn't get him here, leaving him empty-handed in seventh place.

With Marvin gone, the action picked up quickly. First, Tom Hall took a bad beat with

when Tsang made a pair of kings, leaving Hall severely short. He was all in on the next hand with

but Lo Shing Fung made top pair and sent Hall out in sixth place.

Shortly after the players took a one-hour dinner break, Tsang and Cheong saw a flop that they both loved, but Cheong had the better end of it and got all of Tsang's chips as a result. Four players saw limped flop of

peeled off on the turn. That's when things got interesting; Cheong checked and Tsang bet 250,000. Cheong then check-raised all in and Tsang quickly called off his remaining 500,000. Cheong held the mighty

, which in this case made the second nut straight, and Tsang had

for a flopped two pair. The river failed to pair Tsang and was gone in fifth place.

flop, but it only got worse for him from there. The

on the turn improved both players but gave Gruissem several extra outs for the win, and the

on the river completed his backdoor flush. That sent Fung home and increased Gruissem's chip lead.

Gruissem got lucky again when he eliminated Paul Phua in third place. Phua opened to 180,000 and Gruissem responded by moving all in from the big blind. Phua struggled with a decision for several minutes before deciding to call, and Gruissem acknowledged his mistake before turning over

. Fortunately for him, he was drawing very live against Phua's

on the turn was all the German needed to eliminate the businessman from Malaysia. That left Gruissem playing heads-up for the AUD$825,000 top prize.

Gruissem began with the lead and had a chance to put Chrong away early, but Cheong drilled a three-outer to stay alive and take a sizable advantage. But Gruissem battled back and regained control after another entertaining runout. All of the chips were in the middle with Gruissem holding

. Cheong took the early lead when the

flop gave him top pair, but once again Gruissem picked up a big draw when the

fell on the turn. And, once again, he got there with a backdoor flush on the

river, giving him a stranglehold on the match.

Cheong was gone a few hands later when his

lost a flip to Gruissem's

. For his two short days of work, Cheong collected $511,000, while Gruissem added a second High Roller trophy to his mantle.

There's one day left of action at the World Series of Poker Asia Pacific, so don't miss the highlights of the Main Event tomorrow night to find out whether Daniel Negreanu won his fifth bracelet.