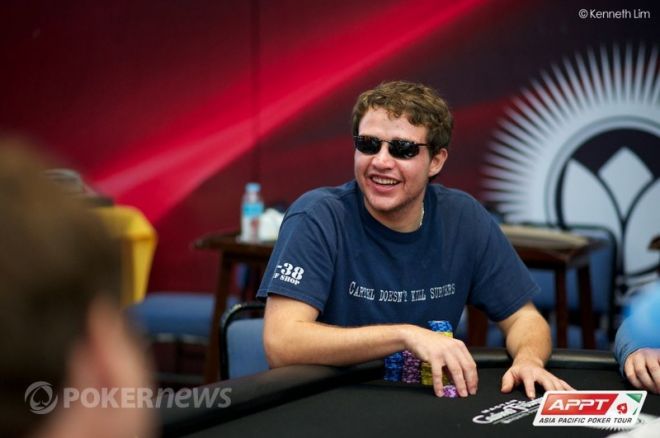 After just six levels of play on Day 3, the final table of the 2013 Pokerstars.net APPT Cebu Main Event is set with Jim Collopy leading the way at the Waterfront Airport Casino and Hotel. Collopy, a highly-regarded online player, is well positioned to win the top prize of PHP 3,948,000 ($96,646) and claim his second major live title of the year after winning his first World Series of Poker bracelet in Australia last month.

Day 3 began with 25 players, and the money bubble was looming as only the top 20 finishers would secure a payday. The action was conservative from the get-go and it took more than three hours to burst the money bubble. Ivan Tan received the unfortunate honor of bubble boy after he moved in with

and was called by Milan Gurung who had

would come on the river to send Tan to the rail.

Although there was a slight stall in action at several points, there were times when eliminations occurred in a flurry. Among those who fell just shy of the final table were Christian Friedrich (20th), Ying Zhao (18th), Lingling Teng (16th), Daniel Francis (13th), Kevin Zhang (12th), Milan Gurung (11th) and Andrei Kaigorodtcev (10th).

After coming into the day trailing Daniel Spence, Collopy went on an all-out attack, eliminating players seemingly at will. He took out Francis with a rivered straight, and then out-kicked Zhang when both players moved all in preflop holding and ace. He took out his third player in a row when he out-flopped Gurung holding

, when he was up against

Make sure to join the PokerNews Live Reporting Team on Sunday beginning at 12:15 pm PHT when we will be providing the exclusive live coverage of the final table in beautiful Cebu, Philippines!

And just in case you're wondering where these players retreat to after their hard work at the tables:

Photo courtesy of Kenneth Lim from the PokerStars Blog.