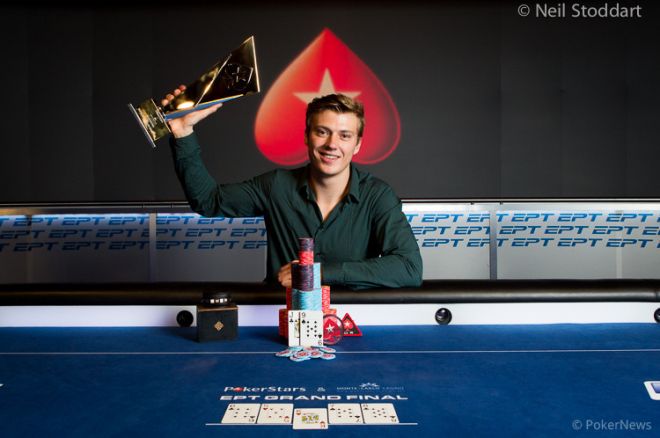 The final day of the final event of Season 9 on the European Poker Tour came to an end in spectacular style on Wednesday. The PokerStars and Monte-Carlo® Casino EPT Grand Final crowned Max Altergott as the last major winner of the 10-day festival after he took down the €100,000 Super High Roller event for €1,746,400.

After less than six hours of play, Altergott defeated Jason Mercier heads up. He crippled Mercier after a huge encounter a short while after their heads-up battle had begun. Mercier moved all in when he had turned a flush draw to go with his pair. Altergott had an overpair (queens) and made the call. The river was a blank, and Altergott finished off the job the very next hand.

The Team PokerStars Pro will take home €1,115,700 for finishing second. Mercier has now cashed for more than $1 million in five out of the last six years and has been one of the best players of the festival. Before finishing second here, he took down the Open-Face Chinese event and made the final table of the €10,000 Main Event.

Just as incredible is the fact that this is the first live tournament cash ever recorded for Altergott. The German (residing in Austria) is a renowned high-stakes heads-up cash-game player, but has just started to play live tournaments.

All seven players who returned today were relaxed in the knowledge they all had €218,300 locked up. Many of the players were very short at the start of play after the long bubble period last night, and the first of those to crack was Mike Watson. He did manage to double up on the second hand of the day but the next time he was all-in, he ran into Sorel Mizzi's aces and busted.

Surprisingly, it took another 100 minutes before we lostScott Seiver in sixth place. It was a pretty standard bust-out for Seiver after he moved all in with

and was called by Mercier, holding

The eliminations came thick and fast from there on in. Vladimir Troyanovsky was eliminated in fifth place for €339,500 after another pre flop all in encounter. Mizzi three-bet all in with

and the Russian called off with

but failed to come from behind. Next to go was Timothy Adams who had done very well to ladder up two places given his chip stack at the time. He moved all in with

and was called by Altergott holding

. The German turned an ace and that was that for the likeable Adams. He took home €485,100 for his efforts.

The three remaining players were fairly evenly stacked and tried to come to a deal. It didn't happen and not long after, the tournament saw the back of Mizzi. He made a large three-bet all in with

but Altergott had opened with

, called, and went on to make a full house. Mizzi had played brilliantly all day and was rewarded with €679,100 for less than three days of work.

This season of the EPT, with the reduced festival-like schedule, has been a huge success and PokerNews looks forward to being an integral part of Season 10. The search for the first double champion continues. Will one be crowned before the 100th EPT at the beginning of Season 11? Stay tuned to find out!