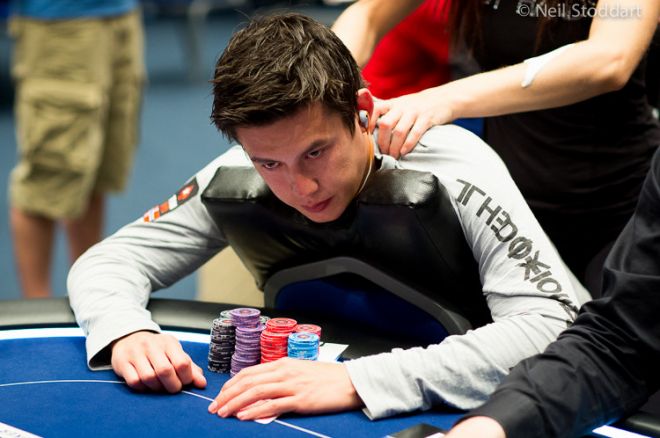 Day 2 of the 2013 PokerStars and Monte-Carlo® Casino European Poker Tour Grand Final Main Event concluded on Wednesday following an exciting six levels of play that saw many of poker's hottest players rise to the top of the pack. At the beginning of the day, 268 hopefuls returned to felt, but that number was trimmed to approximately 110. Topping those advancing to Day 3 was Johnny Lodden with 605,200 in chips.

Lodden held a big stack for most of the day, but it was during the last level that he snatched the chip lead from the rest of the frontrunners. On a board of

land on the river. Lodden checked, and Mamouni quickly checked behind with

for two pair. Lodden showed the

for a flush and raked in the pot.

The very next hand, Paul Volpe opened to 4,800 from under the gun, Victor Sbrissa called in middle position, Mamouni called on his left, and Lodden three-bet to 16,200 from the big blind. Volpe tanked for a bit and then folded, but Sbrissa said that he saw Volpe's holdings while they were being tossed into the muck. The floor was called over, and they told Sbrissa to just resume playing. He did, immediately folding.

While Mamouni was in the tank, Sbrissa had a few words with Volpe. "I don't even know why you're mad at me," Volpe shot at him.

Mamouni eventually called, and the flop came down

. "Great flop for you," Sbrissa said to Volpe out loud, enough for all to hear. Lodden then led out for 15,500, and Mamouni folded.

"You don't do that," Lodden told Sbrissa sternly. Volpe admitted that he had the

, but didn't know how Sbrissa saw his hand. Despite the little spat, Lodden raked in the pot to move close to 600,000 in chips.

While the tournament hasn't reached the money just yet, the prize pool has been released. The eventual winner of this year's event will take home a pocket-bursting €1.224 million from the €5.31 million prize pool. The champion will also receive a brilliantly-crafted watch by Slydeworth more than €5,000. The top 80 spots will be paid, with a min-cash worth €16,000.

Out of all that happened on Day 2, one thing is for certain: the EPT Grand Final will be crowning a brand new champion for 2013. Nicolas Chouity, the 2010 champ, was one of two former winners returning on Wednesday, but he fell during the first half of the day. Last year's winner, Mohsin Charania, was the only other former champion still alive, but his run came to an end in the final level of the night.

With the blinds at 1,200/2,400/300 in Level 14, Charania ran pocket nines into the pocket tens of five-time World Series of Poker gold bracelet winner John Juanda. The money went in preflop and five community cards weren't enough to save Charania. Juanda went on to finish with 181,300 in chips.

On the flip side were Team Pros Barry Greenstein, Marcel Luske, Humberto Brenes, Leo Fernandez, Angel Guillen and Vicky Coren — all of whom were eliminated. Luske has been victorious in his last five events that he has cashed in, but he won't be winning this event one after falling at the hands of Luke Schwartz.

During Level 9 with the blinds at 400/800/100, the "Flying Dutchman" put in a big three-bet to 8,500 after Calvin Anderson had opened to 1,600 and Charbel Salloum flat-called. Action then folded to Schwartz in the big blind, and he four-bet to 15,000. Anderson and Salloum got out of the way, but Luske put in the call to see the

flop. Schwartz fired enough to put Luske all in, and Luske stuck in his last 15,000 or so to put himself at risk. When the cards were tabled, Schwartz's

, and his hand held after the

Day 3 will commence Thursday at 12 p.m. local time in Monaco, and you can expect things to really heat up with the money bubble on the verge of bursting. Be sure to return right here to PokerNews for all of the live coverage from the first shuffle until the last hand of the night.