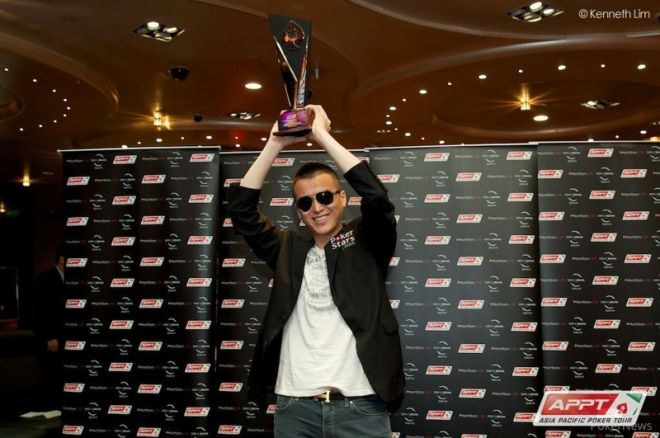 The 2013 PokerStars.net Asia Pacific Poker Tour Macau Main Event came to a close on Sunday after five long days of action. Nine players returned for the final table with Kenneth Leong in the front seat. He held the chip lead for most of the final table but wouldn't be the one walking away with the title. That man was Alexandre Chieng, who topped Leong in a very quick heads-up match to claim victory and the top prize of HKD 2,165,000 (USD$278,940).

The first player to be eliminated at the final table was the man with the most live major final-table experience: Khac Trung Tran. After an open from Leong and a call by Nan Hong, Tran moved all in. Only Leong made the call as he tabled his

, which trailed Tran’s pair of tens. The flop of

was good for Tran, but the

completed the board, giving Leong a flush.

Jay Tan went into the day as the shortest stack and was able to make one pay jump before hitting the rail. She found herself behind with

after she moved all in preflop, but found no help on the

Within one orbit, a third player was gone. This time it was Hao Tian, who three-bet all in preflop for his last 400,000 in chips. Tong, the original raiser, instantly called and tabled

, which were dominating Tian’s

. Tong would flop aces-full, and he eliminated his second opponent in the matter of a few hands.

Almost an hour later, Shuyang Yu was eliminated in sixth place. He moved all in preflop with

and got called by Dinesh Alt holding

. The board bricked out for Yu, leaving five players at the final table.

The chips were close to even after that elimination, with Nan Hong, Leong, Alt and Tong all hovering around the 1.6 million mark, and Chieng sitting on 1.1 million. Alt and Leong gained some momentum, winning several pots between them, before the latter was involved in a massive pot that saw Hong eliminated from the tournament. Leong opened to 80,000 and was met with an overbet all in of 900,000 from Hong. He realized it was a big call, but made it, as he tabled his

. He was in front of Hong, who held

, and when the flop brought the

, he had moved into the chip lead.

Leong then continued on his ways, taking out Dinesh Alt in the biggest pot of the day. It started with Chieng and Tong limping into the pot before Leong raised to 140,000. Alt tanked before reraising to 490,000, and he sat back waiting on Leong. After a brief pause, Leong moved all in for 2,000,000 in chips, and Alt made the call. Leong was ahead with his

, and his position improved when the flop came down

. He would sweat out the remaining

on the turn and river as he rocketed up to 4.2 million in chips.

A few hands later, Tong moved all in for his last chips with

and was called by Chieng who had

. Chieng flopped a set, sending Tong out the door in third place.

, awarding him the title of APPT Macau Champion. It was a great effort by the local player, whose efforts see him walk away with a magnificent trophy, a seat into the Macau ACOP Main Event in October, and the first place prize of HKD2,165,000.