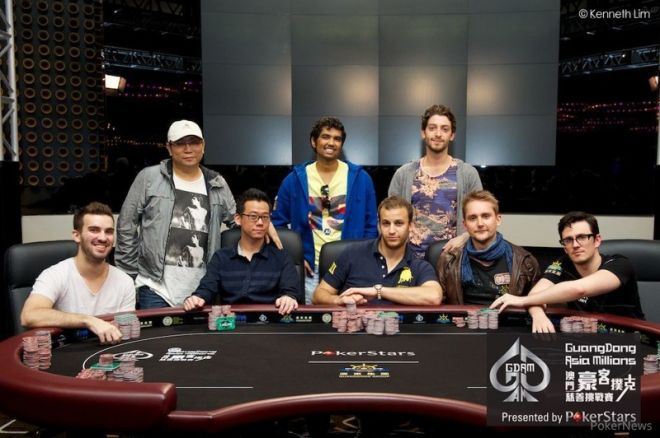 “This is easily the greatest day of my poker career,” Germany’s Niklas Heinecker said following his victory of the GuangDong Ltd Asia Millions (GDAM) Main Event. That’s not surprising considering Heinecker was awarded HK$34,600,000 (US$4,464,516) when he bested a field a 51 top-notch players, eventually defeating Australia’s Jeff Rossiter heads-up to claim the title.

When the final day of action began there were eight players who were all hoping to get where Heinecker stands today. Unfortunately there can always only be one champion though and so seven players had to fall by the wayside, albeit with at least HK$6,000,000 (US$774,193) for their time.

With the average stack at the beginning of the day being only 15 big blinds, it is no surprise that the action was extremely fast paced. In fact it took just a few hands to lose Pratyush Buddiga in eighth place. Buddiga found himself all in holding

and wasn’t able to hold against the

of Igor Kurganov when the dealer spread out a

Just a short while after Budigga’s elimination, Anson Tsang lost all of his chips to Jeff Rossiter. Tsang was all in preflop holding

of Rossier and when a

board was dealt, Tsang was sent home in seventh place.

At this point the play somewhat slowed down for the first time as no player was eliminated for quite some time. However, during that period several players found themselves all in but managed to survive.

Eventually, Igor Kurganov hit the rail in 6th place, with his

being unlucky to fall to Zheng Tang’s

If one player was to be described as having a roller coaster day at the felt, it was Isaac Haxton. Prior to Kurganov’s elimination, Haxton was down to one big blind, but found a couple of double-ups to make the pay jump. Haxton ended up finishing in fifth place when blinds were at 700,000/1,400,000 and he shoved for 14.3 million from the small blind holding

. Tang was in the big blind and called with his

board gave Haxton a sweat on the turn, but it wasn't enough for the PokerStars Team Online member as he made his way to the rail.

The least experienced player at the GDAM final table was Tang, but he put in a solid effort before finishing in fourth place. Tang’s final hand saw him all in preflop holding

board gave Heinecker a pair of queens, enough to send Tang packing.

The fast action continued as Sorel Mizzi was sent home in third place. Mizzi started the day as the chip leader, but was down to 23.2 million when the blinds were at 1,000,000/2,000,000. On his last hand, Mizzi shoved his small blind holding

. Mizzi had two over cards, but when the

board was spread on the felt, MIzzi was eliminated and the GDAM Main Event was down to just two players.

At the beginning of heads-up play, Heinecker held an almost 3-to-1 chip lead against Rossiter, but with the blinds so high, it was still anyone’s tournament. Not surprisingly all the chips were in the middle soon and Rossiter was at risk. It was Rossiter’s

board would be the last five cards the GDAM Main Event would see as Rossiter was sent home in second place, while Heinecker was crowned the victor.

We would like to congratulate Niklas Heinecker on his massive effort that will see him go down in history as the champion of the GDAM Main Event. He also happens to be HK$34,600,000 (US$4,464,516) richer for the experience.

It was once again another superbly run tournament by the staff at PokerStars LIVE at the City of Dreams and we look forward to PokerStars and the GuangDong Group (Macau) teaming up again in the near future to provide more high stakes poker action.