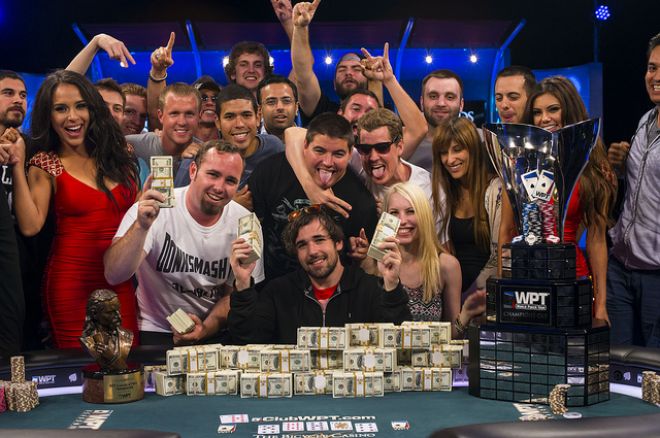 Jordan Cristos won the 2013 World Poker Tour Legends of Poker Main Event late Wednesday night at the Bicycle Casino in Los Angeles. Cristos bested a field of 716 runners to capture the $613,355 prize and his first WPT title. He defeated a tough final table that included Phil Laak, who final tabled this event in 2003, and Dan Heimiller, whom Cristos defeated heads-up after overcoming a sizable chip disadvantage.

The six-handed televised final table kicked off at 4 p.m. PST on Wednesday, and it took nearly four hours for the first elimination to occur. On Hand No. 45 of the final table, Laak was all in preflop with the

gave Laak a winning ten-high straight on the river to stun Gordon and cripple his chip stack. Seventeen hands later, after doubling up once, Gordon's run came to an end.

According to the WPT Live Updates, Ryan Goindoo raised to 400,000 from the button with the

board gave him two pair to send Gordon to the rail with an $85,080 payday.

Despite his stroke of luck against Gordon, Laak was the next to exit in fifth place. With the blinds at 75,000/150,000/25,000, Cristos raised to 350,000 frosm the cutoff, and Laak moved all in from the small blind for 3.7 million. Cristos called instantly and tabled the

, which was way out in front of Laak's

flop gave Laak a few more outs to a straight, the

river sealed his fate in fifth place, denying his hopes of becoming a two-time WPT champion.

That pot gave Cristos the chip lead, but Goindoo stole it right back by taking out Alex Masek in fourth place. On Hand No. 84, Masek moved all in preflop for 1.9 million (9.5 big blinds) with the

, and Goindoo called with the

. Masek needed help and found some on the

flop, but Goindoo paired his ace on the turn and held up through the river to send the six-time World Series of Poker Circuit champ to the rail to collect $156,790.

Heimiller was unusually quiet up to that point, but he soon made his presence known by dismantling Goindoo. After Goindoo raised to 425,000 from the button, Heimiller moved all in from the small blind for 3,125,000. Goindoo went into the tank for several minutes before electing to call, and the cards went on their backs.

Heimiller was in good shape to double up, and he did just that when the dealer rolled out a

board. Goindoo was eliminated on the very next hand when he lost a flip with the

. Heimiller made two pair on the flop, and he suddenly found himself with a 1.5-to-1 lead in heads-up play against Cristos.

Heimiller managed to extend his lead to 2-to-1 before it all came crumbling down. On Hand No. 110 of the final table, Cristos raised to 575,000 from the button, and Heimiller called to see a flop of

— before raking in the massive pot.

Heimiller was never able to recover from that hand, and nine hands later it was over. Heimiller moved all in for 3.8 million (just under 13 big blinds) with

and Cristos called with the

. With the WPT trophy on the line, the board came

to give Cristos a winning pair of nines and the victory. He joined the likes of Will Failla, Andy Frankenberger, Prahlad Friedman, John Phan and Dan Harrington as WPT Legends of Poker champions.