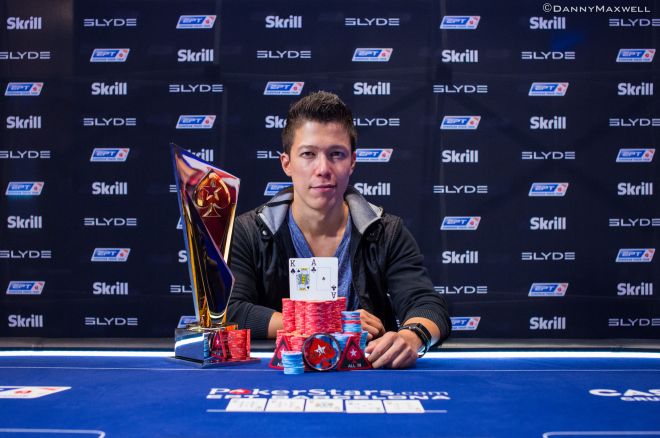 The final day was a rather short day of poker as the final nine returned for the first €10,000 High Roller event on Season 10 of the PokerStars.com European Poker Tour. After the last hand was dealt, it was Thomas Muhlocker who was able to overcome a stacked final table to earn the trophy, the title, and the €390,700 in first-place prize money.

Negreanu's situation heading into this event was particularly interesting as, during his first bullet on Day 1, he disagreed so vehemently with a ruling that he ended up moving all in in the dark and essentially removed himself from play. He came back late in the day with his A-game, however, and pushed all of the way to the final table.

The final table progressed quite rapidly with the first elimination coming fairly early. After a large confrontation with Ole Schemion, Raoul Refos was left crippled. He ended up all in from his big blind the following hand and was eliminated by Negreanu. Refos' elimination set in motion the official final table.

Benefield was the short stack coming into the day and, despite doubling early, he was unable to move past the final eight. Benefield's tournament came to an end when he moved all in against Schemion before the flop only to find that he was dominated. Benefield failed to improve and he went bust in eighth place. The 2013 WSOP November Niner earned €47,850 for his finish.

Schemion's hot streak continued as almost immediately after Benefield's elimination, Richard Yong opened with a preflop raise. Schemion three-bet him and Yong four-bet shipped all in over the top. Schemion snapped and rolled over the

. Yong let out a chuckle, shook his head, and showed the

. Yong found a glimmer of hope when the diamond-filled flop of

hit the felt. Yong was unable to gain a fifth diamond, however, as the

finished off the board. He was eliminated in seventh place.

It seemed that Schemion would be an unstoppable force at this final table, but Negreanu had a different plan. In a key hand that occurred just a few hands after Yong's elimination, Schemion kissed goodbye to most of his stack. Negreanu flopped top set and got it all in against Schemion's flush draw. Schemion did not improve and Negreanu took a commanding lead of the table. Schemion busted a little while later at the hands of Jean-Noel Thorel.

Duhamel was the next to find nothing but felt in front of him. The 2010 world champion got all of his money in before the flop against Muhlocker but was unable to win the race to keep him alive in the tournament.

After Duhamel's fifth-place bust out it was start-of-day chip leader Joni Jouhkimainen who fell next. Jouhkimainen's smaller pocket pair ran into the pocket aces of Thorel, and he was forced to settle for a fourth-place finish.

Negreanu had dominated short-handed play and continued running over the table as play progressed. At one point, Negreanu held seven million of the nine million chips in play against his two opponents. Negreanu gained even more chips when he scored the elimination of Thorel in third place. The flop read

when Thorel shipped his entire stack into the middle. Negreanu snapped him off and showed the

for a flopped straight. Thorel rolled over the

for a flush draw and had hope of catching a heart to double up. Unfortunately for the Frenchman, the final two streets brought black cards and he was eliminated in third place.

Negreanu had a massive chip lead going into heads-up play and it seemed like an almost certainty that he would take home the title. Muhlocker, however, had a different idea.

Muhlocker was able to score his first double up when he held an overpair to Negreanu's pocket fours. Soon after, Negreau picked up pocket fours for a second time and four-bet Muhlocker all in once again. This time, Muhlocker picked up two nines and was able to hold and double into the chip lead. The match only lasted a few more hands and ended with Negreanu moving all in while dominated for the third time. The five-time WSOP bracelet winner was eliminated in second place and took home €263,800 in prize money.

That does it for our coverage of the EPT 10 Barcelona High Roller. Thanks for reading along and be sure to catch all the EPT Season 10 action right here on PokerNews.