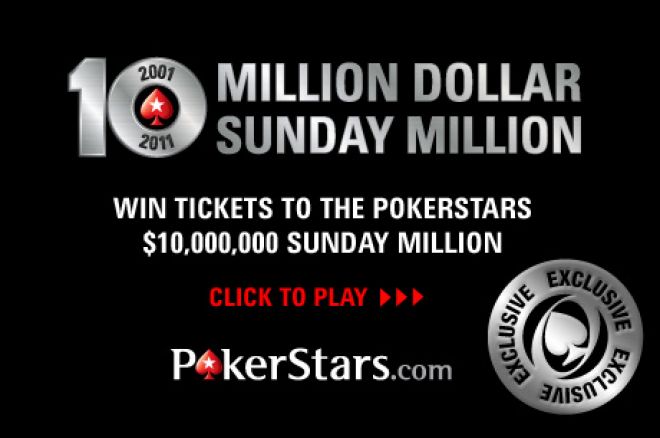 How do you think turning just a couple of dollars into $2 million would feel? Download PokerStars now and find out!

Thanks to PokerNews, your life could change for just a $2+$0.20 investment, so make sure you don’t miss out on tonight’s fantastic opportunity.

This month marks the 10th anniversary of PokerStars and they will be celebrating in style by hosting a Sunday Million which features an unprecedented $10 million guaranteed prize pool.

The 10th Anniversary Sunday Million is set to take place on Dec. 18 at 1430 EST (1930 GMT) and the eventual winner will take home a $2 million guaranteed first place prize.

To help celebrate this monumental moment in PokerStars’ history, PokerNews is hosting a $2+$0.20 tournament which will award a total of 6 seats into the Sunday Million worth $215 each.

The PokerNews 10th Anniversary Special is scheduled for Dec. 16 at 1400 EST (1400 GM) and the top 5 finishers will each win a seat into the $10 million guaranteed Sunday Million.

The satellite tournament costs only $2+0.20 to enter and to take part in the event players simply need the password ”PN10SPECIAL”. In addition to the 5 seats on offer to the winners, PokerNews can announce that an exciting opportunity will see one additional seat awarded.

If you ever dreamed of sending a professional poker player to the rail then now is your chance as Team PokerStars Pro Pat Pezzin will be playing in the PokerNews 10th Anniversary Special.

The best part about Pezzin taking part in this event is that he will have a bounty on his head. The player who eliminates Pezzin will be awarded a $215 seat into the 10th Anniversary Sunday Million.

This bounty seat is in addition to the 5 seats which are on offer to the top 5 finishers and gives even more incentive for player to take part in this great initiative.

The PokerNews 10th Anniversary Special is almost here so if don’t yet have an account, be sure to sign up for a PokerStars account through PokerNews. Remember to use the marketing code "POKERNEWS.COM" and the bonus code "STARS600" and you can receive a very generous 100% up to $600 first-deposit bonus.