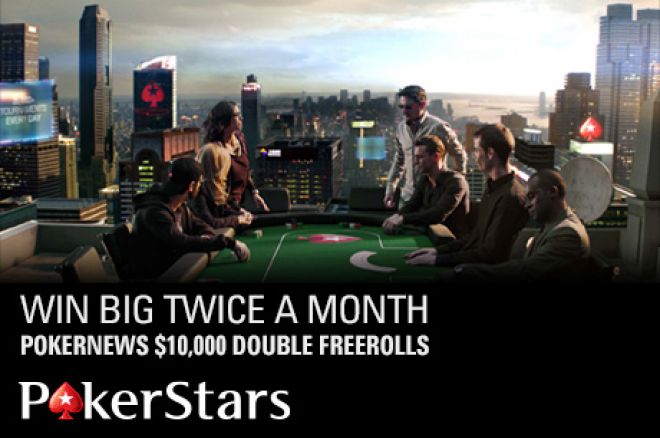 If you like money, and we know you do, you are going to love playing at PokerStars, as we are going to give you a really easy access to $70,000 in freerolls!

Did we succeed in getting your attention? Good. Very good. Here's how you can find pockets full of cash – ready it carefully, as this is not the kind of offer you are going to find every day!

Even if summer hasn't officially started yet, it is already time to get excited - as the first freeroll tournament is right around the corner.

Get your fingers flexed and your mouse ready to play for some big bucks for free in the upcoming PokerNews $20,000 Freeroll starting at at 19:00 GMT on June 5.

Attention: time is running out to qualify for this tournament, but if you hurry up there is still time to get in the action.

There are two separate paths to qualify for this tournament, depending on whether you already have a PokerStars account or not.

If you already have opened a PokerStars account through PokerNews, the path is quite simple. Just generate 100 VPPs during the month of May, and you will automatically be eligible to compete for a share of $10,000.

Frankly speaking, 100 VPPs isn't a lot, and it's indeed something you should be able to generate even if you haven't played at PokerStars at all this month.

If you do not have an account at PokerStars yet, well – then you are lucky.

In this case, all you need to do in order to qualify is to download Pokerstars through PokerNews, open an account using the unique marketing code "POKERNEWS.COM" before May 31, and make your first deposit using the bonus code "STARS600".

Following these easy steps will not only allow you to be eligible for many PokerNews-exclusive promotions - including June's great $20,000 freeroll - but also entitle you to a 100% deposit bonus up to $600.

If you have already met these requirements during the month of May, just go ahead and register for the tournament by either searching the private tab in the tournament lobby for the PokerNews $20k Freeroll, or via the tournament ID 909796230.

So mark you calendars and don't forget to play in the PokerNews $20,000 Freeroll on June 5.

Head to the $20,000 PokerNews Freeroll landing page for all the terms and conditions of this promotion.

Due to the special relationship that PokerStars and PokerNews enjoy, we are able to give away another $50,000 in five amazing freerolls during July and August to our players!

Similar to the June freeroll, there are two paths to get involved in the July freeroll depending on whether you are a new or existing player.

If you have already opened a PokerStars account through PokerNews, just generate 100 VPPs in June to qualify for one freeroll, or 150 VPPs to qualify for both $10,000 tournaments. You have an entire month to accumulate these VPPs, and this makes it ridiculously easy to do, regardless of the stakes you play.

The VPP requirement is dropped if do not already have a PokerStars account. If this describes you, your path is, again, a little easier.

Just create a PokerStars account through PokerNews using our marketing code POKERNEWS.COM, and make a deposit between June 1 - 30 and you will automatically be eligible to enter these great-value tournaments using the details listed below.

The paths for the three freerolls in August are similar to July, but with a twist. They are exactly the same if you do not already have a PokerStars account.