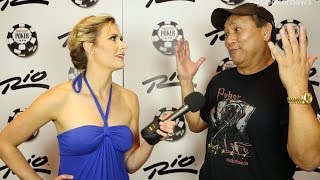 Steven Gee is a professional poker player from Sacramento, California. He is best known for winning the World Series of Poker bracelet in 2010 and for making the 2012 WSOP Main Event final table. However, Gee's October Nine experience didn't last too long as he was the first player to leave the final table and cash more than $750,000 for his ninth place finish.

Steven Gee was born in China, but moved to Sacramento, California with his parents at a very young age. His poker-playing days go back to 1970's when he gambled and hustled in Sacramento's back-alley pool halls and card rooms. Gee mostly played ace-to-five lowball draw back then, and it wasn't until 1990 that he learned Texas Holed'em. Gee entered the live tournament circuit in 2005 playing a few minor tournaments, while his big moment came in 2010 when Gee won his first WSOP bracelet. Two years later he went even further by making the 2012 World Series of Poker Main Event final table.

Gee learned poker at the age of 12, and by the time he was 20 he was already playing $60/$120 limit lawball cash games at the Oaks card club. These were considered high stakes games back then and Gee was enjoying the life of the high roller until he went broke at the age of 27. He then decided to quit the game for good. Gee got a California State University at Sacramento degree in business administration with a concentration on accounting. He then got a job as a the manager of software projects for the California Public Employees Retirement System.

However, this wasn't the end of Gee's poker career. He re-entered the poker scene in 2005, playing a couple of small tournaments at first, and the started playing professionally once again in 2008. The comeback soon paid off as Gee won his first WSOP bracelet in 2010 and then made the Main Event final table in 2012.

Gee first cashed at the World Series in 2009 when he finished 286th in the $1,000 No-Limit Hold'em event for almost $3,000. However, he did much better the very next summer when Gee scored a total of three WSOP money finishes and won his first bracelet. He conquered the $1,000 No-Limit Hold'em event collecting just over $470,000. Two years later, in 2012 Gee came back to the world's biggest poker event to make the headlines once again. This time for making the most prestigious final table of them all, the October Nine. Unfortunately for Gee he was the first player to bust once the play resumed in October and went home with more than $750,000 in cash.

Apart from his bracelet win and the WSOP Main Event final table finish, Gee had never won more than $4,500 in a live tournament. This comes as no surprise given that Gee made a 25-year pause in his poker career and the fact that he spends way more time playing casino cash games than tournaments.